In previous Climate Scorecard articles, we have hinted at how Land Use and Land Cover Changes (LULCC) are a pressing concern for Brazil’s commitment to emission reductions targets. That is because throughout history Brazil has been marked by the consistent removal of tropical forests, a human-induced impact credited as being a relevant source of carbon emissions. What happens is that considerable amounts of carbon in Brazil are released to the atmosphere every day when forests are cleared, burnt, and/or converted to subsequent land uses, such as agriculture.

In Brazil, the largest percent of GHG emissions comes from the agriculture, land-use change, and forestry sectors, which contributed to more than 50% of the countries’ emissions in 2018. According to data extracted from the MapBiomas Project, in 2018 around 30% of Brazil’s area was devoted to farming, with about 20% dedicated to cattle and 10% for agriculture. It is also relevant to mention that Brazil is at the top of a list of countries with the world’s highest rate of deforestation.

Although empirically documented, there is still a lot of debate over the drivers of those LULCC. In the beginning, deforestation in Brazil was primarily the product of subsistence farmers who cut down trees to produce crops for their families and local consumption. That quickly changed with the rise of export-orientated commodities: sugar cane, coffee and, more recently soy bean production. Currently, an increasing proportion of deforestation is driven by industrial activities and large-scale agriculture.

International trade is often brought up as one of the key components in deforestation for agriculture conversion in Brazil. A lot of influence is credited to, for example, the phenomena of land displacement by countries such as China. The term displacement refers to countries using land abroad to increase their agricultural land, which is also referred to in the literature as “virtual land use”. The idea would be to displace land resources needed for food production, therefore transferring the environmental impacts to producing countries such as Brazil. The theory backed by some empirical evidence is that when China started to experience rapid economic and urban growth it started to demand commodities such as soy and cattle; this in turn lead to Brazil quickly rising as its main commercial partner in 2010 and consequentially transforming natural forest areas for farming production.

A different take on trade influencing deforestation in Brazil relates to the exploitation of high-profile wood, such as the mahogany tree. The argument is that this species has a leading role in opening the forest to large-scale deforestation as the prices of timber reach high values in the international market. The opening of roads to get to mahogany forests that were previously inaccessible led to settlements by farmers, illegal logging, and land speculation.

The fact that it is hard to adequately assess the impact each of these factors has on deforestation in Brazil, combined with the magnitude of the country itself (which makes monitoring very challenging), makes it hard to design efficient public policies targeting the protection of natural biomes. More than that, it looks very clear that the current government is unwilling to do so.

Elected to power in January 2019, Jair Bolsonaro relies on the intense support of “ruralist” legislators who have traditionally opposed forest protection policies. Bolsonaro and other senior figures have encouraged the exploitation of the Amazon rainforest, denigrated critics and denied publicly man-made climate change, which is claimed to be a “Marxist conspiracy”. Many environmental laws have already been weakened and there has been severe cuts in funding and personnel, as well as changes in lead positions at key government environmental agencies. This has severely reduced Brazil’s ability to monitor, inspect, and prevent environmental crimes, including illegal deforestation.

Brazil’s remarkable progress in forestry emissions mitigation observed since 2004 has stopped, and deforestation and resulting emissions increases have recently picked up speed again, with the 2019 dry season breaking records in deforestation and forest fires. More recently, Brazilian Environment Minister Ricardo Salles called on the government to push through further deregulation of environmental policy while people are “distracted by the coronavirus pandemic”, in a video from a government meeting that recently surfaced on the internet after the supreme court ordered its release following corruption charges made on President Bolsonaro.

This is particularly concerning when taken into account that Brazil is home to a large percentage of the Amazon Rainforest. Not only is it such a key component of the global carbon cycle that its health is deeply correlated with the health of the planet but also it hosts about 10% of the world’s known biodiversity, including endemic and endangered flora and fauna. Additionally, it provides relevant ecosystem services to local communities and indigenous people living off the land. Undoubtedly, it is an area in need of the most protection right now, given the spike in deforestation rates in the last months (Deforestation in the Brazilian Amazon has surged to its highest rate in more than a decade) and the human-induced wildfires[1] earlier this year.

To diminish deforestation in the Brazilian Amazon, some organizations have argued that large financial resources are required to give illegal loggers and farmers economic incentives to pursue other areas of activity. Non-governmental organizations (NGOs) such as WWF and the Rainforest Alliance have also been active in the region. However, deforestation in the Amazon has rapidly increased by over 30 percent since 2018 according to the INPE. The Amazon’s deforestation has been seen to be at its highest levels since 2008. This could have very significant long-term implications for the health of the region and impacts on the functionality of the global regulating ecosystems. Many studies even argue that the Amazon may soon be reaching a tipping point due to the deforestation and rising temperatures beyond which it will be hard to recover.

It is interesting to point out that some experts suggest that expanding the agriculture frontier through deforestation is not necessary to increase productivity, but rather it can be achieved by investment in more sustainable and efficient agriculture methods. Nevertheless, up until this date, there are no new policy instruments or regulations being discussed to advance implementation of emissions mitigation in this critical sector. The transition to a low carbon agriculture and the fall of deforestation rates seems, above all, highly unlikely right now.

Figure 1: Co2 Emissions per sector, Brazil, 1970- 2018, available at: http://plataforma.seeg.eco.br/total_emission#. Respectively, the colours indicate Industrial Process, LULCC changes, Energy, Agribusiness sector and Waste. As seen, the LULCC sector is the one that contributes the most consistently for the last decades. 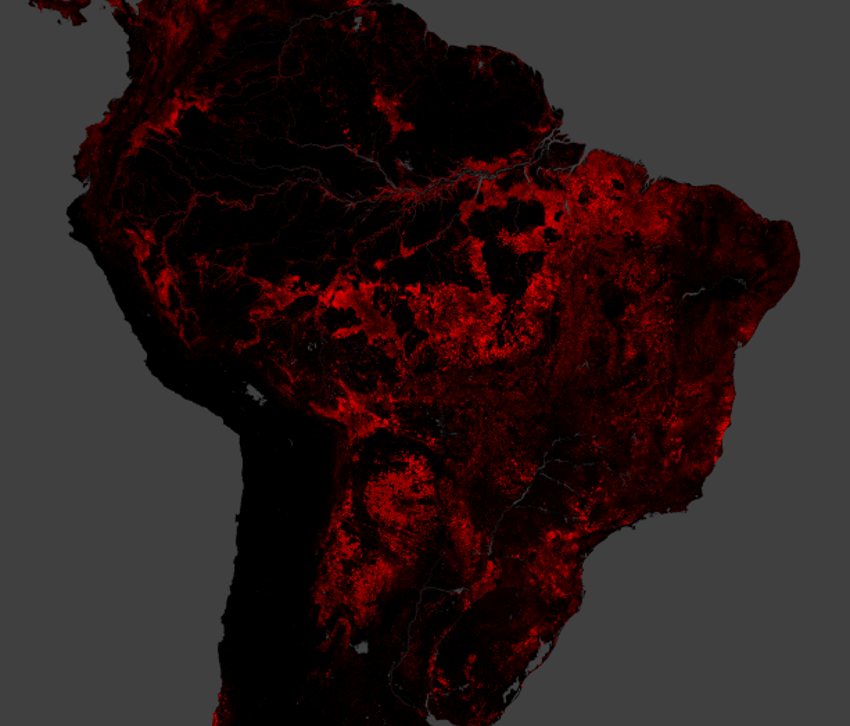 Figure 2: Loss of Forest in Brazil, 2000- 2018, available at: https://earthenginepartners.appspot.com/science-2013-global-forest 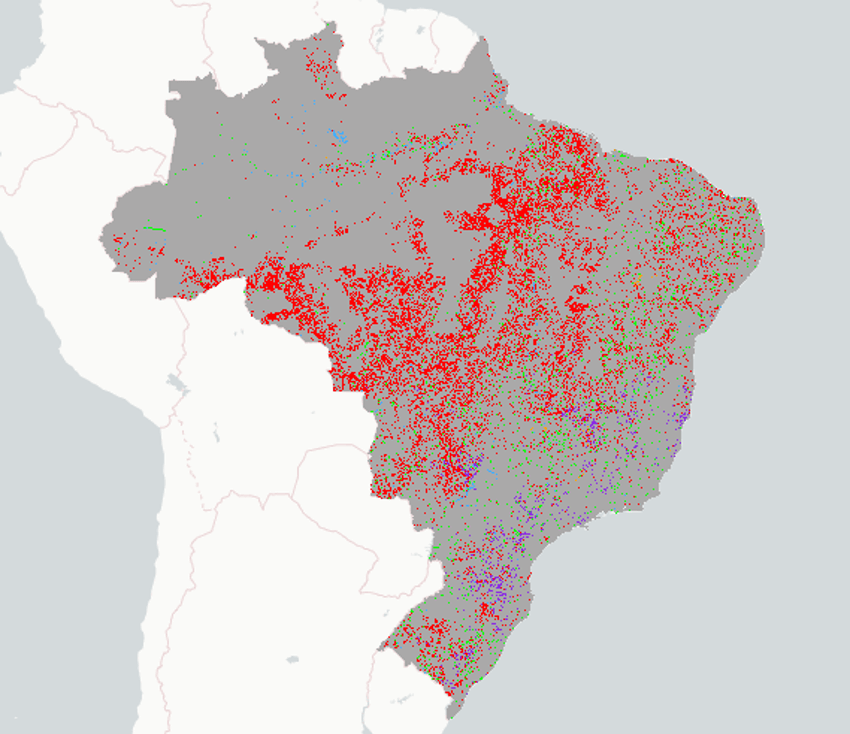 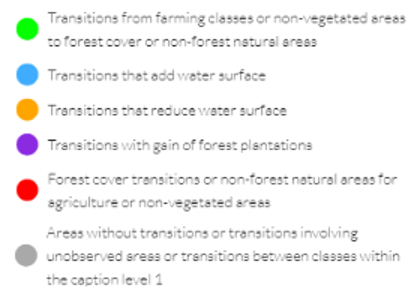 Figure 3: Land Use Transitions in Brazil, 1985- 2018, available at: https://plataforma.mapbiomas.org/map#transitions 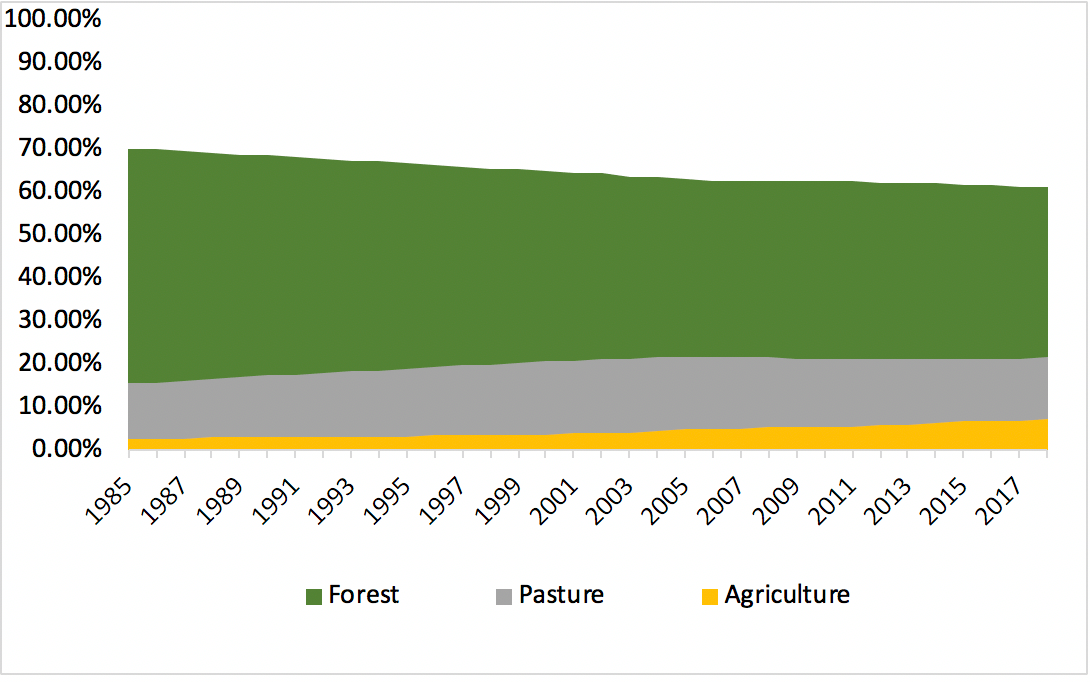 Figure 4: Percentage of Cover in Brazil per Land Use, 1985- 2018, Elaboration by the author using data from the Map Biomas Project. Not included in the picture are areas of characterized as non-forest natural formation, non-vegetated area, non-observed and water. In the analyzed period, there was a 12.9% decrease in Forest cover and 46.9% increase in areas marked by the presence of farming, including pasture and agriculture.

Although Brazil hosts a lot of natural areas and is home to expressive biodiversity, wild areas are clearly under threat at the moment. Bolsonaro’s administration’s approach to deforestation for agriculture conversion is a serious and growing cause of concern.

The coronavirus pandemic is not an excuse to promote deforestation on the Amazon! On the contrary, it highlights a perfect opportunity on how important it is to prepare for climate change mitigation in Brazil. It is not your job as the Environment Minister to advocate for the expansion of the Agriculture sector in Brazil, but rather to promote better biodiversity policies that will help mitigate climate change and protect human health and well being for generations to come.

[1] The interested reader may refer to our previous post on Similarities and Differences in the Forest and Bush Fires in Brazil and Australia.