Nothing has made Brazil more relevant in recent news and in climate change discussion than the fires in the Amazon Rainforest at the end of 2019. The ongoing crisis shows a stark comparison to other devastating wildfires in recent months. In particular, with the wildfires in Australia gaining a lot of momentum in the news, it is important to remember that both events are not entirely comparable.

The influence of global warming on the intensity of situations is one of the few possible similarities, as most researches agree that fires in Australia, Siberia, and Brazil are going to get worse with the warming of the planet.

However, while in many Australian ecosystems fires are natural occurrences that can be intensified due to extreme temperatures and a longer drought period (likely linked to climate change), the Brazilian fires in the Amazon Rainforest have an artificial nature.

The forests lie in a tropical ecosystem (hence the name Rain-forest). This means that the intense precipitation regime faced by the region is usually very efficient in keeping the forest from spontaneously burning. Think about the tall canopy laden with dripping ferns and orchids, tree trunks covered in spongy mosses and lichens, and the morning mist only slowly burning away as the sun rises. While there is fuel everywhere, it seems unimaginable that such humid ecosystems could ever catch fire.

What was seen in 2019 was the result of different human-induced inputs that are tightly linked with the history of deforestation in the country and land use changes transitions. 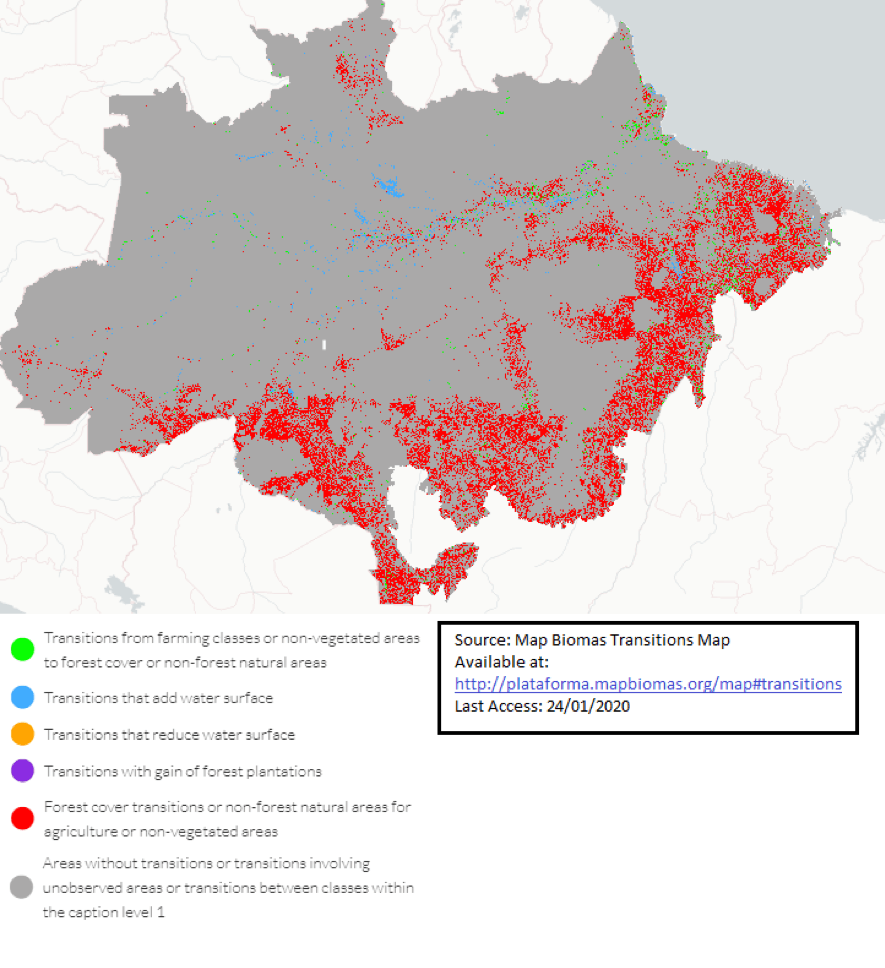 Over the past few decades, as seen in the map above, Brazil has been experiencing a conversion of forest cover to areas for agriculture or non-vegetated areas, regardless of pleas done in the Paris Agreement of 2015 or the notion that the Amazon is such a key component of the global carbon cycle that its health is deeply correlated with the health of the planet. Moreover, it hosts 10% of the world’s known biodiversity, including endemic and endangered flora and fauna.

Interestingly enough, transitioning from forest cover to agriculture also does not make sense from an economic and ecosystem services point of view. That is because the Amazon soil is very nutrient-poor, which means that it needs extreme (and costly) fertilization to host the production of crops. The reason why it is initially able to support such exuberant and high level of plant species in its original state is due to a very delicate cycle of nutrient balancing, in which the biomass stored above ground later falls and restores carbon and other important plant nutrients to the soil. Therefore, removing the forest cover makes the soil less productive, up to the point where it can be completely depleted, and ranchers will move to different lands and deforest more.

The fires play a huge role in this process, as they open the way for the agriculture and later farming that follows. Some of the fires are related to a recent spike in deforestation, when the cut vegetation is burned to create cattle ranches and support land claims. Others will be agricultural burns, when fires are used in rotational agriculture or to clear encroaching scrub from existing pasture.

It is important to separate these illegal fires from the small-scale slash-and-burn agriculture used by Amazonia’s traditional and indigenous people. Although these fires can escape into forests, they are also essential for maintaining the livelihoods of some of the Amazon’s poorest people.

What are the drivers of this land transitioning from forest cover to deforestation and to agriculture? The answer lies within the Amazon rainforest itself, that holds several types of forest trees. More importantly, high-profile wood species, such as the mahogany tree, are among those species. There is a recurring theory it has a leading role in opening the forest to the large-scale deforestation that follows, as the prices of the species reach high values in the international market. The opening of roads to extract mahogany generates access to other simpler tropical species and, finally, culminates in the creation of pasture and agricultural areas.[1]

THE MAGNITUDE OF THE PROBLEM

The comparison between the size of the fires in Brazil and Australia – frequently made in social media – is not accurate. The fires in the two countries have different causes, and there are different ways in which they are measured and reported.

According to data from the Queimadas program, from INPE (National Institute of Space Programs), between January and November 2019, an area of ​​70,698 km² was burned in the Brazilian Amazon. This is equivalent to 7 million hectares. INPE uses satellite data, and is still processing the month of December.

In Australia, according to the newspaper The Guardian, the total amount burned since the beginning of the season, in June 2019, until this the 8th of January, was estimated to be 10.7 million hectares. The newspaper is compiling data reported by each Australian state.

One figure refers to almost an entire year in Brazil; the other, the Australian fire season that started in June. However it is important to note that because of the way the data is collected by INPE, many researchers suggest the numbers in Brazil are deeply underestimated. That is because the satellites find it difficult to detect fire under the treetops, detecting better when in open areas or in biomes such as the savannah or savanna.

It is very unclear how long it can take for the Amazon to recover from the stress caused by the burnings.

Different from the rapid spread of the Australian fires, it is estimated that in the Amazon flames advanced 200 to 300 metres a day and rarely exceed 30cm in height, burning only leaf litter and fallen wood. Most mobile animals are able to flee, and firefighters – if present – can bring it to a halt by raking simple fire breaks.

But the intensity of a fire does not necessarily predict its severity. The lack of natural adaptation to deal with wildfires make rainforest species incredibly sensitive. Unlike in Australia, the Amazon ecosystem did not evolve being somewhat resilient to the fires due to its coexistence to it. For example, in ecosystems that evolved with constant natural fire, trees have very thick bark, forming a barrier against flames. Tree bark in the Amazon, on the other hand, is quite thin. Therefore, even a low intensity wildfire can kill half the trees in the case of the Amazon biome. While small trees are initially most susceptible, larger ones often die in subsequent years leading to an eventual loss of more than half of the forest’s carbon stocks. These large trees hold the most carbon, and subsequent regrowth of pioneer species is no compensation – once-burned, forests hold 25% less carbon than unburned forests even after three decades of regrowth.

There are also impacts on biodiversity and on the communities that are sustained by the forest. Primates are less abundant in burned forests and many specialist insectivorous birds disappear altogether. And local people, who use forests for game, building materials and medicines, lose one of their most important safety nets. All this happens when a forest burns for the first time. However, the situation is very different when forests suffer recurrent fires. Then, fuel from previous tree mortality creates a veritable bonfire, tinderbox dry under an open canopy. Flame heights in these forests often reach the treetops, causing the death of almost all remaining trees.

There are more similarities in the way Australian Prime Minister Scott Morrison and Brazilian President Jair Bolsonaro handled events than between events themselves. Both representatives took what can only be called as a position of extreme denial.

In August of last year, when the fires in the Amazon made headlines around the world, Bolsonaro minimized data from NASA (the US space agency) and INPE. Both pointed to a greater number of fires in Brazil in nine years.

Then, the president also said that NGOs would have caused the fire in response to reduced transfers of federal funds to them. This escalated to point where NGO’s had their offices raided and members arrested. Additionally, Bolsaro even involved celebrity Leonardo DiCaprio in the tale, suggesting that because he donates to NGO’s that work in the Amazon he is actively promoting the fires and can be considered one of the main culprits. When famous Activist Greta Thunberg publicly called out Bolsanoro’s actions as a crime against humanity, he called her a “brat”.

Only when the case gained wide national and international repercussions – even being debated by leaders at the G7 summit – did the Brazilian government finally decide to send army troops to fight the fires.

The influence of human action on climate change is not a consensus among members of the Bolsonaro government. Foreign Minister Ernesto Araújo, for example, has already said he is opposed to “climate alarmism” and that he considers climate change to be a “Marxist conspiracy”.

If Brazil preserves the Amazon, it will greatly help mitigate global climate change. Under the Paris agreement, Brazil committed to cutting 37% of its carbon emissions by 2025, and 43% by 2030, which implies reaching annual total emissions of 1.3 Gt CO​2​ e6 within six years and 1.2 Gt CO​2​ e within 11 years. The measures that Brazil intends to adapt to achieve its targets, as announced in the past, are listed in the table below:

Using 2018 data from Global Forest Watch, 46% of Brazilian emissions were from deforestation (land use) and 24% from agricultural activities. This makes it clear how continuing with records of deforestation and burnings in the Amazon makes it very unlikely that Brazil will be able to meet its Paris Agreement targets. It is very interesting to point out that, because of the lush vegetation, the Amazon is still a very important carbon pool and the accelerated burnings of the past months are releasing countless amounts of carbon back in to the atmosphere.

If this pattern remains, the biome may stop being a pool of carbon storage/sequestration and become a source of it. This tipping point is referred in the literature as “savanization”, which would be the deforestation and burning breaking the current equilibrium and making the ecosystems in the Amazon acquire “savanna-like” characteristics, which will only accelerate climate change even more (the resulting scrub and sparse trees may share superficial similarities with fire-dependent tropical grasslands, but they contain none of their unique biodiversity or cultural values, as well the potential for storing carbon). Instead, recurrent wildfires are more likely to hasten the Amazon’s transition to a low diversity and low carbon ecosystem with a fraction of its current social and ecological value.

Nevertheless, it is extremely relevant to highlight that in the past Brazil was able to reduce deforestation rates by about 80% (from 2011 to 2018), so it is not impossible to revert the current trend. It will all depend on enforcing a political scenario that makes climate mitigation strategies for the Brazilian Amazon a priority. For that reason, it is very important that everyone continue to talk about the fires in the Amazon and demand action from the government.

Brazil is experiencing a serious and unprecedented environmental crisis, deeply related with climate change. As representative you should address the matter seriously, work to exploit the real potential of the Amazon for Brazil, and not support the current patterns of transitioning to non-sustainable agriculture. Stopping the Amazon fires is a necessity to achieve the goals Brazil committed to in 2015. More than that, it is a demand from your citizens.

[1] This theory was based on Working Papers from Climate Scorecard Brazil’s manager Luiza Karpavicius and Prof Ariaster Chimeli, from the University of São Paulo.