In 2019, energy-related CO2 accounted for approximately 90% of Japan’s total greenhouse gas (GHG) emissions. Under the Paris Agreement, Japan has committed itself to a Nationally Determined Contribution (NDC) of reduction in GHG emissions compared to 2013 – 26% by 2030 and 80% by 2050. Eventually, it hopes to achieve net-zero emissions “as early as possible during the second half of the 21st century,” according to the government in 2019. The government has outlined a long term strategic plan of innovating new technology and infrastructure and increasing the share of renewable energy to 22-24% and nuclear energy to 20-22% to achieve this. To accomplish these goals, Japan must reform its energy sector drastically.

On June 11, 2019, Japan’s “Long-term Strategy under the Paris Agreement” was approved by the Cabinet under Prime Minister Shinzo Abe. The Strategy repeatedly emphasizes innovation, through still underdeveloped technologies such as carbon capture utilization and storage (CCUS), space solar power, and innovative nuclear reactors, which could be used to justify the continued use of fossil fuels.

Japan has shied away from phasing out existing-coal plants, or even terminating the ongoing construction of coal-fired power plants domestically and internationally. As of March 2020, it is planning to build 22 new coal-burning power plants at 17 different sides in the next five years. If these projects came to fruition, they would emit an additional 74.7 million metric tons of carbon dioxide each year. Moreover, since 2013, bilateral finance institutions like the Japan Bank for International Cooperation and private banks like Nippon Export and Investment Insurance, have invested over $18 billion to support foreign coal-fired power plants, coal mines, and coal-related electrical transmission, according to the Global Energy Monitor. As you can see below (Figure 1), Japan’s progress in decreasing the use of fossil fuels has been very slow.

On the positive side, Japan has committed itself into becoming a hydrogen-based society.  Japan is seeking to combine hydrogen with fuel cell and power-to-gas technology to fully decarbonize the electric power and transportation sectors, as well as incorporate into industrial use and heat utilization by 2050. Hydrogen has the potential to become a fully decarbonized alternative source of energy because it does not emit CO2 during its use, and its production can utilize renewable energy and CCUS technology.

In December 2017, the government published the Basic Hydrogen Strategy. It plans on building an international, commercial-scale hydrogen supply chain and reducing hydrogen costs to levels comparable to conventional energy, such as decreasing from 100 yen to 30 yen per Nm3 by 2030. From 2012 to 2018, Japan invested approximately $1.5 billion into hydrogen technology research and subsidies. However, hydrogen remains a relatively undeveloped sector compared to other renewable energies, and the government will have to invest much more resources and attention to drive down its costs and related technology for the impact to be substantial. 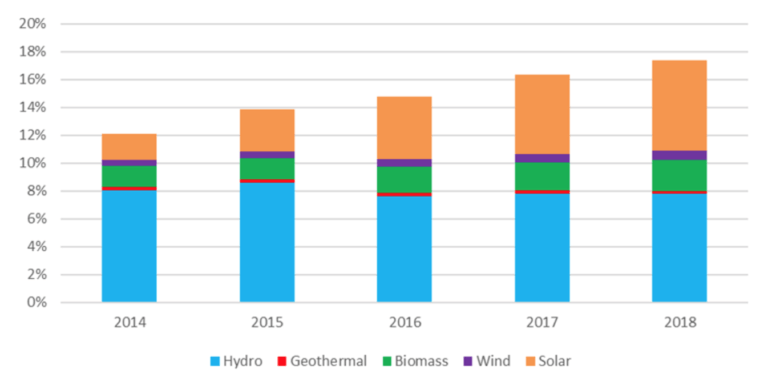 One of these methods was the significant cut to the purchase price of electricity generated by solar power from $1.64 per watt in 2011 to $0.70 per watt in 2018.  Another major method was the April 2017 revision of the feed-in-tariff (FIT) scheme established in 2012 to incorporate more rigorous timelines and feasibility criteria in renewable energy facilities. In fact, the government is still going through discussions for a radical revision of the FIT scheme, such as an auction system for nonresidential solar power.  Japan has also committed itself to magnifying offshore wind power generation by passing the Act of Promoting Utilization of Sea Areas in Development of Power Generation Facilities Using Maritime Renewable Energy Resources in 2018. The Japan Wind Energy Association estimated that by 2030, 10GW of offshore wind capacity will be installed, which will cut carbon dioxide emissions by 70 million tons.

However, these attempts have yet to make a sufficient impact. While solar has noticeably increased their contribution to the country’s energy mix from 1.9% in 2014 to 6.5% in 2018, biomass from 1.5% to 2.2%, and wind from 0.5% to 0.7%, other forms of renewable energy such as hydropower and geothermal have stagnated or even decreased (see figure 3).

Figure 3: Transition of the share of renewable energy to total power generation in Japan | Source: ISEP based on statistics of METI, etc.

In addition to renewable energy, the other non-fossil energy source Japan plans on becoming increasingly reliant on is nuclear energy.  Following the 2011 Fukushima Daiichi nuclear disaster, all but two nuclear reactors were shut down and its role in the Japanese energy mix dropped from 30% in 2011 to almost 0% in 2014. As an alternative, liquefied natural gas and coal were heavily used. The first two restarted in August and October 2015, with a further seven having restarted since. 17 reactors are currently in the process of restart approval. To this day, the Japanese population maintains a strong anti-nuclear sentiment. As Japan plans on restarting or building multiple more nuclear power plants to meet its NDC, the government must ensure they meet the world’s strictest regulatory standards set by the Nuclear Regulation Authority (NRA). (984)

First, if all governments adopted Japan’s level of NDC, global warming would reach between 3-4 °C. To remain consistent with the 1.5°C goal under the Paris Agreement, Japan’s emission reduction targets should be more ambitious – decrease 45% by 2030 and reach net-zero emissions by 2050, according to the IPCC. Without sufficient goals, the energy market cannot go through the necessary reforms.

Moreover, Japan’s focus on energy market reforms have been centered on technology and infrastructure like achieving a hydrogen society or exploring CCSU that are yet to be developed. The government has taken steps to reform its energy market, but it should take more decisive action in limiting the use of fossil fuels whilst pushing for renewable energy and not-yet commercially available technology.

We are happy that Japan has taken steps to reform the energy market, from increasing the accessibility of renewable energy to exploring innovative technology like achieving a hydrogen-based society. However, we fear that this rate of change is too slow and narrow. We ask the Ministry to improve our NDC to reflect bigger increases in the share of non-fossil energy sources in the energy mix, cease all building of fossil fuel plants, and devote more attention and resources to the reform of the energy market.