The primary energy supply for Italy over the time period 1990-2018 is derived from the following sources: 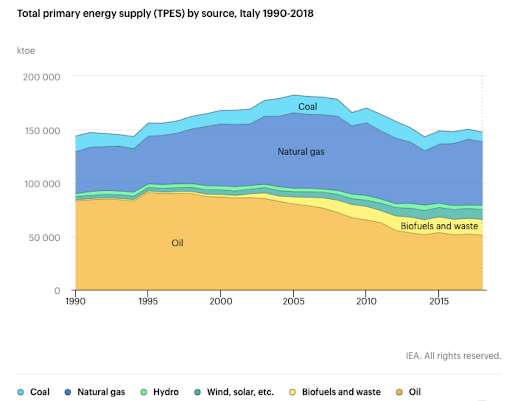 In recent years Italy introduced measures to address some near-term energy transition goals (coal to gas). Development in the gas sector has been slow, as the graph above shows no major change-over-time. Nevertheless, one can see that renewable energies (in green) and biofuels and waste have increased their share of total energy production. In particular, in 2018, 17.8% of final gross energy consumption came from renewable energy, which exceeds the 17% target for 2020, contained in the National Action plan for renewable energies (2010). 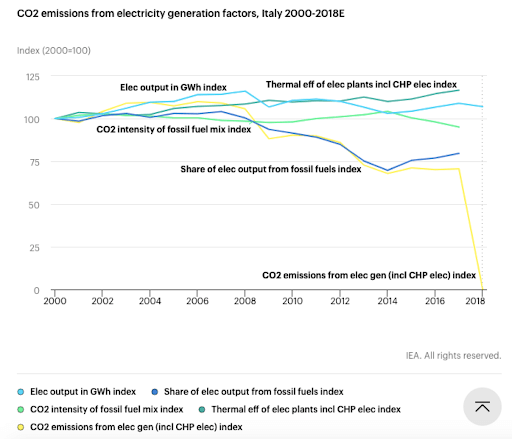 Decarbonization of the electricity sector is at the heart of the response to the climate change threat. However, the graph above shows no major variation in the number of carbon emissions from electricity generation over the past 8 years.

Italy does not have nuclear energy resourced.

Government energy reforms have had some positive effects, notably in the electricity sector where the price of electricity in Italy is the same as in the rest of Europe. In addition, since the Great Recession, energy demand in Italy has generally fallen (Deloitte, 2015[1]), making energy intensity quite low. Moreover, technology-based programs, such as smart metering, have improved the efficiency of the country’s electricity energy system.

The main problem remains in the fact that Italy’s own energy resources are scarce, and the country remains dependent on the importation of fossil fuels. This explains why energy prices are among the highest in Europe.

This dependence on imports also reduces energy security, because the sector is subject to exogenous shocks and cannot be shielded from international volatility.

Italy should reduce its dependence on fossil fuel energy imports and its reliance on non-renewable energies. The transition to renewable energy in the transport sector, in particular, should be facilitated.