Spotlight Activity: Mexico’s Current Fossil-fuel Based Energy Strategy Is Not Compatible With Its Climate Mitigation Goals

Mexico has great potential for generating electricity from renewable sources. Thanks to the implementation of the Energy Reform and the goals set in the Energy Transition Act, public policies that allow the implementation of clean energy projects have been developed. The country has specific goals and tools for transitioning to clean energies, and there are key mechanisms that support the promotion of clean energy generation.

In 2014, the country set up Clean Energy Certificates (CELs), an important incentive for clean energy. In this mechanism, electrical utilities and voluntary users have clean energy quota obligations and can buy and sell CELs, equivalent to 1 megawatt-hour (MWh) produced with clean energy. This approach guarantees that an increasing share of total power demand will be met with clean generation. The target begins at 5% in 2018 and will increase gradually to 13.9%.

Another valuable instrument, which is currently on hold, is the national Long-Term Auctions (SLPs). Long Term Auctions were a biding mechanism for the assignment of long-term contracts for electricity coverage for the sale of power and accumulative electricity. Private companies bid for projects to cover clean energy needs (at first for the government owned CFE and then private companies were also able to buy clean energy. SLPs will increase the amount and proportion of energy generated via clean sources, thus generating CELs as well.

Through SLPs, entities responsible for providing electricity to consumers can enter into contracts to meet its Power, Cumulative Electric Power, and CELs needs. This tool assisted Mexico to become one of the countries with the lowest prices for renewable energy generation in the world. Costs per MWh fell by more than half, from $47.78 in 2016 to $20.15 in the third auction in 2017.

In 2016, Mexico made a series of commitments on climate change, along with the United States and Canada, including pledges to achieve 50% clean power generation across North America by 2025 and to develop a long-term low GHG emission strategy for 2050. More recently, Mexico joined 23 other countries in the Powering Past Coal Alliance, vowing to phase out existing coal plants and restrict the construction of new coal plants without carbon capture and storage technology.

However, regardless of the county’s legal framework and international pledges, its energy mix is dominated by oil and gas, with fossils accounting for nearly half of the total, a considerably larger portion than the regional average. In the first half of 2018, Mexico had an installed energy capacity of 75,918.42 MW, of which 31.45% came from clean sources. On the other hand, generation from clean sources reached 24.12%, less than a percentage point to meet the 25% clean energy generation target stated in the Energy Transition Act. This total consists of 17.29% came from renewable sources, while 6.83% was “other clean energy” which includes nuclear and co-generation. Large-scale hydropower is the leading source of renewable energy capacity (15%), with wind a distant second (6%). 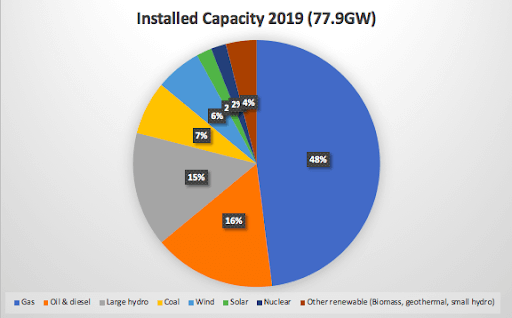 Enacted laws and reforms, as well as implemented instruments, allowed Mexico to increase its renewable energy share considerably: from 2017 to 2018. The highest-growing renewable technologies were photovoltaics, wind, and cogeneration. These laws enabled clean energy installed capacity by 11.84% and generation by 21.71%, achieving lower prices per kWh as well.

The trend towards renewable energy has slackened in recent years. Although president Obrador’s administration has maintained the goal of 35% of all power generation coming from clean sources by 2024, actual policy steps have not been aligned with such target. Obrador’s administration has placed energy as one of the main axes in its plans and policies, with the aim of achieving “energy self-sufficiency” by 2024. Rather than focusing on renewables, plans and policies are heavily reliant on a revamp of the oil industry. Mexico’s current administration aims to prioritize modernization of the country’s existing power plants, mainly coal and natural gas, and refineries. This entails more GHG emissions and more negative externalities related to fossil fuels. However plans for repowering existing big hydro plants have also been discussed.

The future of Mexico’s energy sector is still uncertain. Albeit it is understandable that energy self-sufficiency, accessible electricity, and low fuel prices are sought for, it is imperative to fast-track the transition to a low-carbon economy. Continuing with the uptake and advancement of clean energy technologies should be a policy priority.

Mexico has taken big steps towards a low-carbon, future-proof economy. Using solar and wind energy, the country has proved the benefits of having a clean energy transition. Renewables also help reduce the geopolitical risk of fossil fuels since gas is imported from the United States. Returning to the use of fossil fuels means taking steps back on climate action, air quality, new investment and technologies as well as not achieving one of the government’s main goals of energy security.

The current fossil fuel-based strategy is not compatible with mitigation goals and renewable energy commitments. The strategy not only entails environmental and health risks, but potentially a huge economic and political misstep: renewables help reduce the geopolitical risk of fossil fuels, as Mexico imports most of its gasoline, natural gas, and coal. Developed and developing nations alike are increasingly looking towards greener and more efficient options for energy and fuel generation, sending a clear signal as to where future investment and R&D will be allocated.

The current strategy is not compatible with national mitigation and energy penetration goals and commitments. We applaud the efforts to guarantee accessible and affordable energy. However, it is necessary to carry on with the energy transition, as it implies economic, environmental and social benefits, as well as achieving national and international climate goals. Studies and past experiences have proven that renewable energy can be more profitable and help achieve energy security, along with a better quality of life for the country. We ask the current administration to make clean energy a priority and support the expansion of renewable energy technologies, furthering the country’s environmental commitments and goals. We ask the new government to ensure that its energy initiatives are consistent with national climate goals and commitments, not only for the betterment of the planet and future generations, but also for public health as well as long-term economic stability.