Spotlight Activity: Japan Needs To Unlock Policy Barriers In Order To Increase Its Use Of Renewable Energy

In order to achieve these targets, the government of Japan has laid out its long term energy-policies in the “5th Strategic Energy Plan”, published in July 2018. According to this Strategic Energy Plan, Japan aims to achieve GHG reduction of 26% by 1) raising the share of renewable energy to 22-24%; 2) utilizing nuclear energy to 20-22% of total energy share; 3) efficient fossil fuel use; and 4) 35% cut in substantial energy consumption by energy saving. As for 80% target of 2050, the government aims to gradually shift towards a carbon-free society. However, these policy goals are still achieved half way through, are not rigorous enough, and more efforts are expected.

Currently as of 2018, it is estimated that the share of total renewable energy to total power generation (including home consumption) in Japan was 17.4%, total fossil fuel accounting for about 80% and nuclear energy around 5% (Figure 1). Among the renewables, hydro and solar energy account for the major part of the total power generation (Figure 2). Share of solar energy saw a substantial increase thanks to the introduction of feed-in-tariff (FIT) scheme in 2012. Yet, other renewable energies such as wind, biomass, geothermal and small hydro still hold only a small amount of shares to total energy production. In addition, the Japanese government is planning to revise the FIT scheme currently in practice, which would raise the market price for renewable energy supplied electricity. Overall landscape of renewable energy source in Japan remains grim.

It is also the case that developments of geothermal energy production in national parks are prevented due to regulations by the Ministry of Environment to protect the natural environment. In a similar manner, the development of major wind power generation plants is strongly disincentivised due to obligatory legal environmental impact assessments (EIA) which could take as long as 4 years. In some cases, timber chips used in biomass energy production are imported from outside of the country due to high-cost of timber chips produced in Japan. Renewables, as new-coming power suppliers into the market, are also often greatly disadvantaged compared to the existing supplies such as nuclear power and coal fired power plants which are given priority in the grid connection. 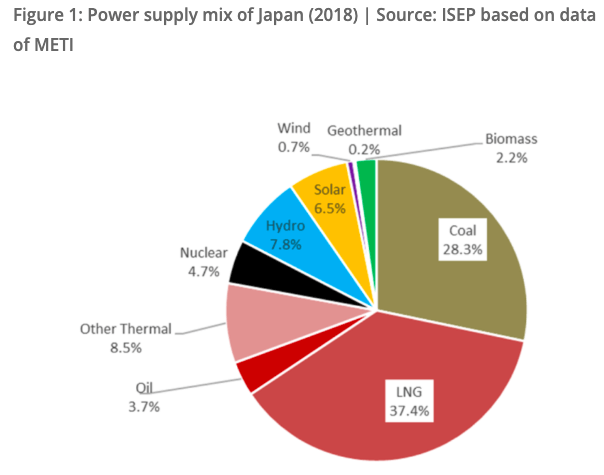 Japan still has a high share of fossil fuel produced energy. Liquid natural gas is amply used to meet the demand of electricity previously supplied by nuclear generation before the Fukushima nuclear accident, as renewables and energy savings are insufficient to cover the electricity production loss.

Compared to other countries of similar development level, Japan lags behind in both its GHG reduction target and its achievement. Many European countries have already achieved more than 30% share of total energy production by renewables. There are also many countries with more than 20% share of VRE (Variable Renewable Energy), compared to a mere 7% in Japan. Equally, Japan’s target to raise the share of renewables to 24% by 2030 seems notably low considering the fact that some countries have already set out a target of 100% electricity supply with renewable energy.

Some work with the electricity market is also needed. Barriers to enter the market are currently too high for renewable energy due to the “first-come basis” based on the electricity business Act, which limits physical space available for grid connection. Additionally, it should be made obligatory to display the details of electricity prices according to the type of power supply and to release information on power generation companies and wholesale electricity trading market.

Although the difficulty of balancing mitigation of climate change and economic prosperity always remains, we ask that the Ministry becomes more aware of the responsibility Japan holds to international society and aims higher in its commitment to renewable energy development. We expect that the Ministry reconsiders the use of resources for nuclear energy and makes full use of potentially effective advanced technologies available in promoting renewable energy. Especially as the FIT system currently in practice are being reconsidered, we would like a substantial alternative plan to keep promoting renewable energy.

Ministry of Economy, Trade and Industry,

Agency for Natural Resources and Energy: