According to the International Labor organization (ILO), Green Jobs are those that produce a product or service related to environmental conservation and management, that make processes more sustainable within any industry and that have decent work conditions. Thus, green jobs are those that have an environmental component and include decent work conditions. Green jobs are set in the center of a sustainable economy and one of their fundamental characteristics is to provide decent jobs with adequate wages, professional and personal growth opportunities, and a decent and safe lifestyle (ILO, 2007).

In a 2013 report published by the ILO, the Evaluation of the Potential of Green Jobs in Mexico, the organization analyzed for the first time the number and potential of green jobs in the country. Back in 2011, employment reached 40.5 million jobs, half of these were concentrated in three sectors: commerce (20%), manufacturing industry (15%) and agriculture (15%) (ENOE,2011). Of the 40.5 million employed, 66.5% (26.9 million) worked informally (ENOE, 2011); these included subsistence farming, paid housework, and workers within the informal sector. The main problem in the Mexican labor market was the poor working conditions; where more than 46% of employees lacked contracts and 40% had no benefits. A total 1.815 million direct environmental jobs were found which represented about 4.5% of the workforce in 2011. The nine key green activities identified in the country and the specifications considered within them are listed below:

Results also showed that out of the 1.815 million direct environmental jobs, another 971 million indirect jobs were created, adding to a total of 2.786 million jobs. This showed that environmental activities were highly integrated in the national economy. The green activities that generated the greatest amount of indirect jobs (in relation to the number of direct jobs) were: manufacturing industry, renewable electric energy, waste management, and temporal lodging services. The whole economy is benefited by shifting to greener activities; less energy and inputs are used while the well being of the population increases when pollution and emissions decrease. Four sectors stand out as a result of the study undertaken: renewable energies, organic agriculture, sustainable construction and clean industry.

The report concluded that considering the national climate change policy and its objectives for 2030, renewable energy generation must be encouraged, since it was the economy’s second most productive sector. Furthermore, the growth of renewable energy production is mainly based on services, construction and manufactured inputs, strengthening local economic activities. This is reflected in the large number of indirect jobs generated by this sector (double the amount of direct jobs). Organic agriculture had the highest employment multiplier, alongside a superior output multiplier than its conventional counterpart. It should be promoted as an inclusive rural development mechanism, since work conditions are better than traditional agriculture due to the elimination of harmful chemicals. In order to promote organic agricultural activities, sectorial policies and incentives are needed to stimulate the low national demand for organic products (which currently depend on international markets). Green construction and manufacturing activities have an equal or superior employment multiplier – and an equal output multiplier – as their conventional counterparts.

According to the ILO report, activities to further develop the green labor market could include: sectorial policies for green activities, policies and regulations that promote green businesses (i.e. fiscal incentives), training and green skill development programs, an information system on the green labor market, research and development, development of further skills and fiscal reforms which include the implementation of a neutral green tax.

More recently, in 2019, the Secretary for Work and Employment Promotion (Secretaria de Trabajo y Fomento al Empleo, STyFE) together with the ILO held a training workshop on green jobs for businesses and unions. For Mexico’s City government, caring for the environment is one of the main axes of public policy. This is why the promotion of green jobs is critical for the Decent Job Program (Programa de Trabajo Decente, PTD), as part of the actions to develop answers to current challenges in technology and the environment. The government of Mexico City is elaborating a new labor strategy: public policy labor focused on the circular economy, environmental protection and industry 4.0.

As all major countries in the world, Mexico is no exception to the challenges of needing to transition from informal and formal jobs to developing new technologies that make a responsible use of natural resources. A circular economy according to STyFE has sustainability as a priority and promoting this model will help fight poverty and build better living conditions. New technologies are a bet to generate more and better jobs as they also offer better salaries and are committed with the environment. The memorandum of understanding signed by the STyFE, ILO and the Secretary of Environment (Secretaría del Medio Ambiente de la Ciudad de Mexico), will allow for the development of the actions needed to create green jobs and allow for a transition to a sustainable and resilient economy and the design of new and improved public policies dedicated to improve employment rate in the city . 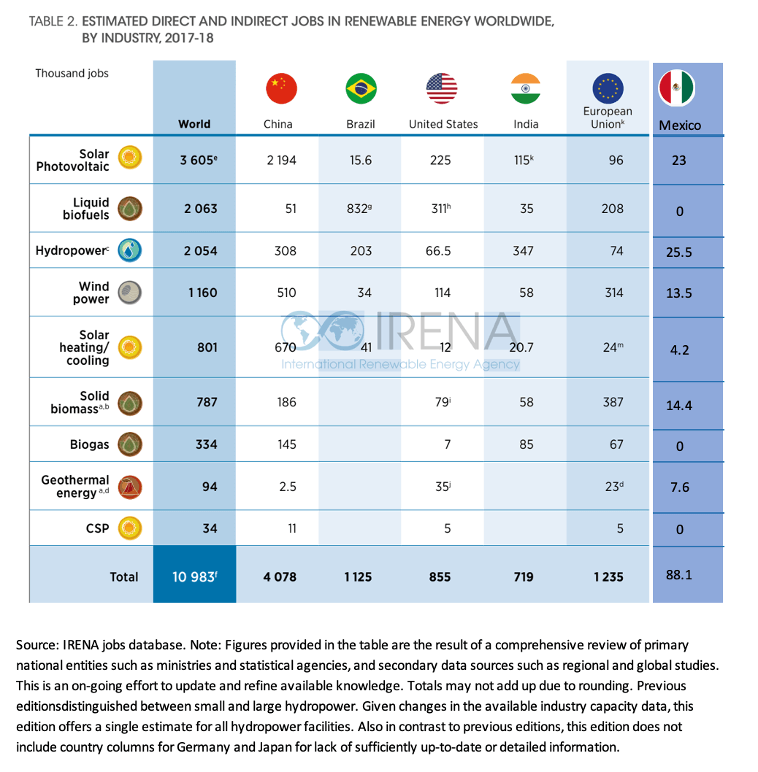 Based on information from salaryexplorer.com, a person working in Environmental in Mexico City typically earns around 48,100 MXN ($ 2,186) per month. Salaries range from 21,600 MXN ($982) to 77,600 MXN ($ 3,526). This is the average monthly salary including housing, transport, and other benefits. Salaries vary drastically between different Environmental careers. If you are interested in the salary of a particular job, see below for salaries for specific job titles.

As suggested by the ILO report in 2013, when analyzing the transition to a green economy, it is important to consider a holistic approach, where the objective is not only to increase the quantity of green jobs, but create an overall increase in well being for the population by making economic activities more efficient, sustainable and decent. A systemic vision is required, which includes transversal policies, social dialogue and participation of all governmental levels.

As part of Mexico’s commitment to the sustainability of the energy sector we encourage the use of renewables and the jobs that are associated with this industry’s development. We ask the current administration to make clean energy a priority and support the expansion of renewable energy technologies, furthering the country’s environmental commitments and goals.

We applaud the efforts to guarantee the development of green jobs and the promotion of social well-being and industry innovation to make an improved use of Mexico’s natural resources.