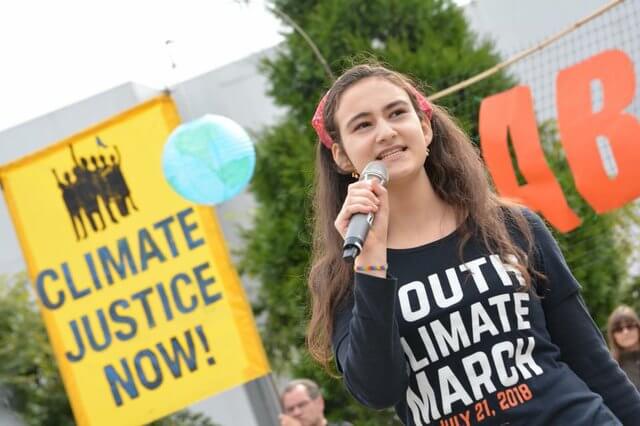 Jamie Margolin is a 17-year old climate activist and student, founder of Zero Hour, and a plaintiff in a lawsuit against the state of Washington for its inaction on climate change.

Margolin stands for the idea that a stable climate is a human right. She calls for an intersectional, immediate climate action movement. She worked with Alexandra Villasenor to organize the U.S. Climate Strike and organized protests across the country. Her organization, Zero Hour, joined the lawsuit Juliana v. United States in suing the federal government for the right to a stable climate, and she sued as one of the plaintiffs in the Aji P. v  Washington, a similar case against the state of Washington.

An outspoken young voice, she has brought together youth across the U.S. in a show of force for a common cause: action on climate change. She has called for an end to all fossil fuel extraction and use, the complete reformation of mass factory agriculture, and the inclusion of indigenous voices in future climate planning. In addition to economic changes, she calls for policies and societal transformation to address structural inequalities based on race, gender, and economic status, and the history of colonialism. Her identity as a queer, Latina, Jewish, young woman allows her to see many of these structural inequalities and to propose solutions to address them. In September 2019, she testified to Congress alongside Swedish youth activist Greta Thunberg on the urgency of climate action. She is also an outspoken supporter of the Green New Deal.

Because of her age, and like many other youth activists, Margolin faces many obstacles to being heard; in particular, many Republican pundits openly hostile to climate action derided the young activists after their testimony to Congress for being “too young” to understand climate science. She also speaks extensively of the sexism she endures from older white men speaking over her or talking down to her on panels because of her gender and race. Additionally, many people who consider themselves politically “centrist” are repelled by the inclusion of other social justice priorities into environmental movements. Margolin and others would argue that addressing these issues is the only way to address the root causes of climate change itself.

In addition to mobilizing millions of students to show support for urgent climate action, Margolin and her counterparts have inspired a generation of teenagers to speak out on environmental and social issues and created a platform for them to call for change. Together, they have defied social norms and paved the way for further youth activism.

The greatest success of the modern youth climate movement has been the elevation of the Green New Deal from a fringe policy proposal to a prerequisite talking point for every major Democratic primary candidate in the 2020 presidential race and a serious bicameral bill introduced by Senator Bernie Sanders and Representative Alexandria Ocasio-Cortez. Although the plan has yet to be enacted, the conversation has shifted from a discussion of whether there should be policy action on climate change to how that policy action will be structured.

In an op-ed published in the Guardian in July 2019, she wrote:

“This is how systems of oppression intertwine with the climate crisis. People of color, women, poor people, disabled people, queer people, homeless people – pretty much everyone who is already vulnerable is disproportionately at risk from climate disruption.

“Which is why the climate crisis demands bigger solutions than we initially thought. We need to see the climate crisis not as a stand-alone issue floating separately from everything else, but as the grand culmination of societal injustices that have been building up for centuries. We must speak truth to power, call out these systems of oppression and put social justice at the center of our fight for a livable future. We must pressure elected leaders, corporations, the news media and others in power not only to abandon fossil fuels and other climate-destructive activities but also to address the systems of oppression that gave rise to the climate crisis in the first place.”

We were already over 350ppm when I was born (The Guardian)

I’m not only striking for the climate (New York Times)

Forget about saving the planet – let’s be more selfish (HuffPost)

A teenager’s account on smokey skies in Seattle (HuffPost)

We youth can’t vote: but that’s not stopping us from taking political action to save our futures (HuffPost)

To stop the climate crisis, let’s dismantle the systems that caused it