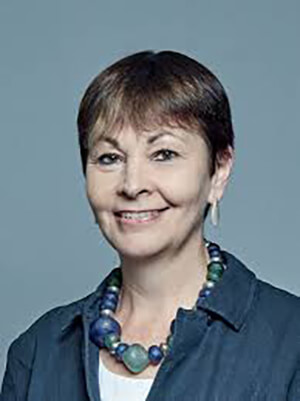 Caroline Lucas, aged 58, is a member of parliament for the Green Party, holding the only Green seat in the UK, at Brighton Pavilion. She is the former leader of the green party (2008-2012) and has been the co-leader of the party since 2016. In addition she is the chair of the party parliamentary group on climate change. She has long advocated for affordable clean energy, notably forming the Energy Bill Revolution, a campaign to accelerate investment in renewable energy and improve efficiency to lower prices, ending fuel poverty. It had the support of over 200 UK NGOs. Most importantly it raised the standard for energy policy, researched UK climate change and set a strong precedent for renewable energies.

This campaign reflects a wider belief held by Mrs. Lucas that energy should be more localized to remove the power of the Big 6 energy companies in the UK. In line with this, she worked with Friends of the Earth to build solar panels on schools across the UK. Further, she advocates for environmental protection in any deal proposed to leave the European Union, which could be viewed as successful as in the most recent deal proposed, it states the UK will adhere to EU environmental policies. She has continuously pushed to end fossil fuel subsidies, revealing the government’s ongoing greenwashing strategies. Unfortunately, only having one Green party seat in parliament has hindered the progress of these policies, but she has managed to raise large awareness around these issues. If her policies were to come to fruition, the UK could transition away from fossil fuels and meet our commitments to the Paris Agreement by 2050.

To overcome these shortcomings, she helped form a cross-party coalition in April, joining Ed Miliband, Laura Sandys and Lucas to advocate for a green new deal bill. The Green New Deal that proposes how the UK can shift to net-zero by 2030 by decarbonizing the UK economy. The Green New Deal advocates for a worker-led transition to a green economy, with climate justice and reskilling programs available for those who might lose their jobs. This builds upon the original Green New Deal in 2008, also headed by Lucas, and took ten years to finalize, and still needs to be passed through parliament before any substantial policies are made in conjunction with the bill.

Caroline Lucas regularly writes articles for well-known tabloid papers and media outlets. In addition, below are a list of her published books:

Quote from Honorable Friends: “Overall, becoming a carbon-neutral country would involve changes in our behaviour, but these are modest compared with the changes that will be forced upon us if we do nothing.”