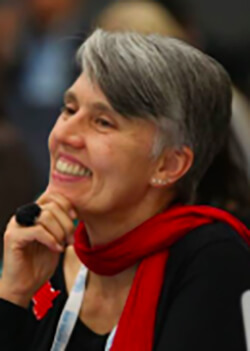 Dr. Debra Roberts is a policy influencer and is on Apolitical’s inaugural list of the World’s 100 Most Influential People in Climate Policy. She is currently head of the Sustainable and Resilient City Initiatives Unit in eThekwini Municipality in Durban, South Africa. She has over 30 years experience in addressing and documenting urban climate change adaptation and biodiversity planning and management in Durban, South Africa.

Dr. Roberts also is an Honorary Professor at the University of KwaZulu-Natal in the School of Life Sciences, and is an advisor to the Global Commission on Adaptation. She has written widely in the fields of urban open space planning, environmental management and urban climate protection, and has received numerous awards for her work.

Dr. Roberts established and managed the Environmental Planning and Climate Protection Department of the eThekwini Municipality and was selected as the city’s first Chief Resilience Officer in 2013. She was a Lead Author of Chapter 8 (Urban Areas) and a Contributing Author to Chapter 12 (Africa) of the Working Group II contribution to the Intergovernmental Panel on Climate Change (IPCC) Fifth Assessment Report. She was elected as Co-Chair of Working Group II for the IPCC’s Sixth Assessment cycle in 2015: the first time in the history of the IPCC that there has been a South African Co-Chair and the first woman from Africa to hold such a position.

She was a member of the South African United Nations Framework Convention on Climate Change (UNFCCC) negotiating team until December 2015, and has sat on various international advisory bodies focused on climate change issues in cities (e.g., the Rockefeller Foundation’s Asian Cities Climate Change Resilience Network and UN-Habitat’s 2011 ‘Cities and Climate Change’ Global Report). She was a member of the Sustainable Development Solutions Network Thematic Group on Sustainable Cities involved in mobilising support for the creation of a city focused SDG (SDG 11).

Transitioning from science to practice, Dr. Roberts faced numerous challenges. She describes, “Once you become a practitioner you are no longer considered to be a scientist by many of the members of the more traditional scientific community. Practice is still seen by many traditional scientists as being unscientific.” In order to bridge this divide, Dr. Roberts and her team have published their work in peer-reviewed literature to demonstrate that practitioner-scientists are an important source of knowledge. After joining local government, she found herself working in what was then a very traditional, hierarchical and male-dominated environment. Dr. Robert’s response was simply to get on with the job and let her work speak for itself. This hands-on mentality led her to establish the Environmental Planning and Climate Protection Department of eThekwini Municipality in Durban, South Africa. In 2016, she was given the responsibility of establishing the new Sustainable and Resilient City Initiatives Unit in Durban and is the city’s first Chief Resilience Officer.

Dr. Roberts is one of the world’s most influential people in setting global climate-change policies. She provided strong, clear and consistently focused leadership. She has become a living example that women can be influential leaders, and that practitioner-scientists can help change the mainstream debate. Additionally, she has also encouraged members of her team to study further and has established research partnerships with the local university in order to encourage and train the next generation of practitioner-scientists.

A quote by Dr. Debra Roberts

“Never leave the room – it is difficult to provide a bridge between the science and practice communities and often you will not fit in comfortably with either. Do not be deterred or intimidated, just keep your eye on the ball and know that it is the practitioner-scientist who has the greatest chance of changing the world.”