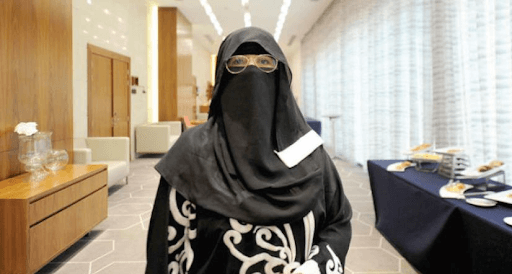 Buthaina Awad is an environmental activist in Saudi Arabia, and currently holds the position of Deputy Director of the General Authority of Meteorology and Environmental Protection of the Saudi Arabia Eastern Region. She holds a Master’s degree in Physics, and has conducted research regarding environmental protection. Awad also heads the “Earth Hour” team in Sharqia. As such, she is passionate about energy conservation. She emphasizes that we need to conserve resources and find a way of life that is sustainable for future generations.

Quote: “Within my sphere of interest is the equitable distribution of energy, and in “Earth Hour”, we avoid an hour of wasted energy every year, because we are individuals that waste a lot of riches and energies without feeling that we are withdrawing from the future balance of children.”

Awad recently assumed a powerful position in the Saudi General Authority of Meteorology and Environmental Protection that covers the duties of inspection and monitoring of compliance with the Authority’s environmental standards and raising awareness of environmental issues. The appointment of Awad is a step in the right direction to increase women’s professional presence in this important institution to support the Kingdom’s efforts to combat all types of pollution, reduce annual costs of environmental deterioration, protect public health, and improve the quality of life. However, due to the general local misperception of the role of women in the workplace and doubts over their ability to perform these types of jobs, Awad faces an uphill challenge to prove her worthiness in performing the tasks of this field-oriented job. Additionally, the assignment is rather recent and limited to the Eastern Region of the Kingdom so it remains to be seen how Awad can prove her qualifications and skills to make a significant positive change in her area and hopefully for the whole country.