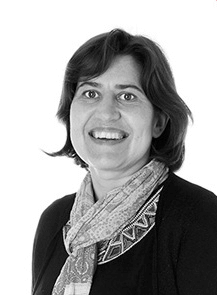 Valérie Masson-Delmotte is first and foremost a nationally and internationally distinguished climate scholar. In 2015, she became co-chair of the International Panel on Climate Change (IPCC) Working Group I (WG I), also known as the Physical Science Basis working group. WG I aims at assessing the physical scientific basis of the climate system and climate change, including topics such as changes in greenhouse gases in the atmosphere, observed changes in temperatures, rainfall, glaciers, and sea level, and historical and paleoclimatic perspectives on climate change. In this role, Ms. Masson-Delmotte has contributed to several IPCC reports. The latest of these is WG I’s contribution to the IPCC’s Fifth Assessment Report (AR5) in 2013; the next report, AR6, is currently underway.

Since 2018, she is also a member of the new national climate advisory council in France (Haut conseil pour le climat), an independent expert body established to guide policy making. The council’s first report, published in June 2019, clearly assesses the climate effects of different sectors in the French society and suggests a way forward for effective climate policy. Through her scientific contributions and roles in the IPCC and the climate advisory council, Ms. Masson-Delmotte is at the centre of climate research and policymaking in France and in the world.

Finally, Masson-Delmotte has actively facilitated the spreading of knowledge about climate change; in the words of the daily Le Monde, she has become “the face of climate science and international expertise on climate change” in France. Ms. Masson-Delmotte has written several popular science publications and children’s books and frequently makes visits at schools and public places to give talks on climate change topics. She has urged youth and students to put pressure on decision-makers and supported popularisation initiatives such as translating IPCC reports into French. In 2018-2019, she successfully advocated for stronger inclusion of climate sciences, and knowledge of the human impact on the climate, in high school curricula in France.

Valérie Masson-Delmotte has spoken openly about the difficulty of conveying scientific information in a clear and truthful, yet convincing way. Some people try to use any scientific errors and approximations to undermine generally solid data, while others react to alarming scientific findings with feelings of fear, helplessness, or anger. Some reject results of climate science for religious or ideological reasons, and still others believe that technological developments will solve any problems related to climate change, which Masson-Delmotte sees as addressing the symptoms rather than the cause. The key to change, however, is that people receive, understand, and act upon information; as Masson-Delmotte has noted, “If the information we [scientists] produce remain shut away in our little scientific world, it has no value. Our challenge is to share it within the education system and with decision-makers.”

Valérie Masson-Delmotte continues to actively contribute to the work of the IPCC and the Haut conseil pour le climat. She has been tireless in her efforts to spread knowledge about climate change, basing her arguments on evidence-based scientific research.

In her own words:

“The understanding of how the climate changes, and the understanding of the role of humankind in this change; these two realisations are shaking up our relation to our environment. We are no longer in a state of uncertainty, staring at the sky trying to figure out what might be coming down on us. We are not passive victims of natural disasters. We are actors and agents, and it is essential that each and every one of us is able to grasp the scope of the challenges brought on by climate change, while having an understanding of the orders of magnitude and of the risks. As we learn about the history of humankind, it is essential that we learn about the history of our climate, the risks induced by our lifestyle, and the considerable greenhouse gas emissions brought about by this lifestyle.”

For a full list of Valérie Masson-Delmotte’s publications, see http://www.researcherid.com/rid/G-1995-2011