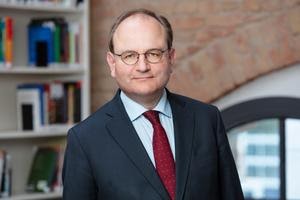 His career path became internationally known as one of the leading authors in the 4th IPCC assessment between 2004-2008. Edenhofer also functions as a consultant for the World Bank in the new “Green Growth Knowledge Platform” and is co-chair of the Energy Platform des European Council of Academies of Applied Sciences, Technologies and Engineering (Euro-CASE).

Edenhofer has contributed both internationally and nationally to climate policies providing guidance and scientific advice. Most recently, he has contributed to the debate on the carbon tax, which is still not part of the German law. He and four other authors delivered a 100-page document on possible pathways for a successful carbon national tax prior to the release of the new climate packet in September this year (2019). The idea proposed was to introduce a 3-step carbon tax by first putting a set price of at least 50 €/ton CO2, then introducing a national carbon trading scheme followed by an international one within Europe. In an interview with the Handelsblatt Magazine, Edenhofer said that his advice would be to slowly increase the carbon price to 130 €/ton by 2030. The government’s newly proposed and endorsed climate packet includes a carbon tax, however the initial carbon price was set to 10 €/ton. Edenhofer commented that the ‘new climate packet was a reason to become hopeless’. With such a low price, the set targets were doomed to fail.

A predominant and recurring challenge for Edenhofer and his research teams are the ongoing debates with politicians and decision makers to take up advice from the scientific community. In a Zeit-Magazine article Edenhofer discusses the struggle that both scientists and politicians have in giving and receiving the necessary knowledge to make proper changes to climate policies. Edenhofer argues that there is a lot of contradicting studies that make it hard for politicians to act. International bodies like the IPCC are the way to move forward, according to Edenhofer, and it is what politicians should trust and take advice from.

In a 2018 German national radio station interview, prior to COP 24 in Poland, Edenhofer commented that the pursued goal of the conference should be leaving with the understanding that global emissions has not yet reached its maximum point. On the question of a carbon price he answered: “Wir haben noch nicht das Maximum der Emissionen erreicht und dieses Bewusstsein muss jetzt bei der COP24 wachsen, dass Staaten sich gegenseitig helfen, vernünftige Instrumente einzuführen. Und ein Instrument, ohne das nichts gehen wird, ist der CO2-Preis. Die Klimapolitik ohne CO2-Preis, das wäre ungefähr so, als wenn man sich eine moderne Medizin ohne Antibiotika vorstellen wollte.“ (“We haven’t yet reached the maximum emissions, and this awareness must grow during COP24 so that nations can help each other implement functional instruments. One instrument, which cannot be excluded, is a price on carbon. Climate politics without a carbon price are equivalent to modern medicine without antibiotics.”)

Over the years, Prof. Dr. Edenhofer has significantly contributed to the global climate scientific community, always with a focus on migration and adaptive mechanisms (particularly in terms of the emission trading schemes) and sustainable economic development. Starting with his own business in Bosnia in the 90’s, followed by his time at the university and finally the first role as leading author for the 4th assessment of the IPCC, Edenhofer has always worked and strived for the greater good of human society. His continuous dialogue with politicians and ongoing research on low-carbon economies has influenced the political debate on carbon trade and the internal coal debate. People like Edenhofer are needed to transform German Climate Change Policy.

All or nothing: Climate policy when assets can become stranded

Article of Edenhofer on the relevance of the IPCC

Link to interview with the German Radio Station (October 2018)