Spotlight Activity: The UK Is Making Good Progress In Its Transition To Renewable Energy But Needs To Get Rid Of Fossil Fuel Subsidies

In the UK, there is a variety of renewable energy sources as the technologies gain more investment over time. Currently, 33% of the UKs energy supply is obtained from renewables, with half of this coming from wind energy, as the UK is in the best position to utilize wind power in the whole of Europe. Other prominent sources include wind, bioenergy, marine energy and solar PV, with their respective output as follows. 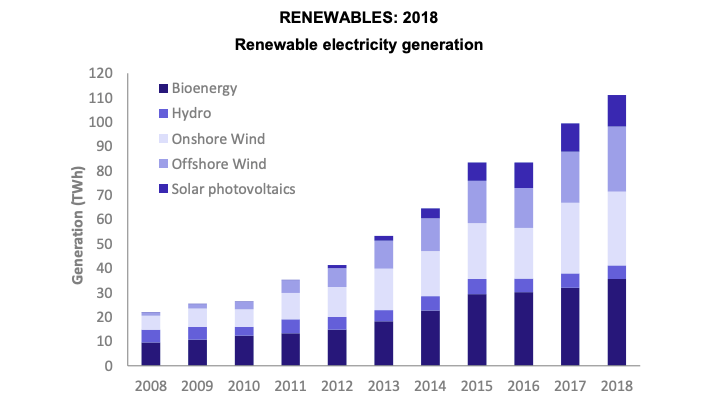 However, the UKs renewable energy is not being fully utilized. Renewable energies had more energy capacity than fossil fuel energy in 2018, according to a study done by Imperial College London, shown below. 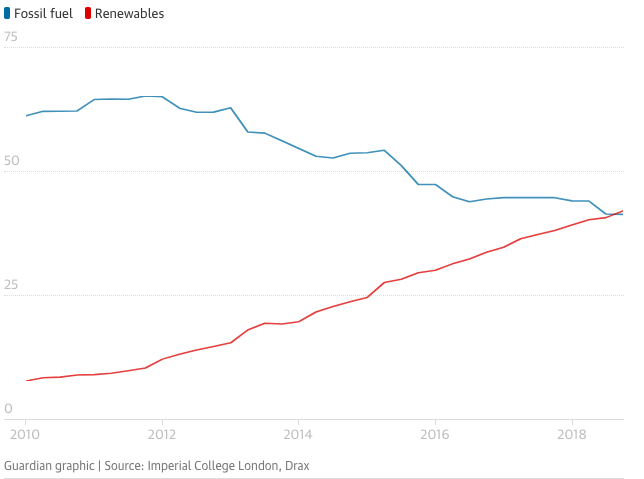 This would suggest renewable energy accounts for little over 50% of the UKs power sources. Although, this transition has shown very fast progression, due to investment growth post – 2011, and it may simply take time for infrastructure to catch up to transport renewable energy to people’s homes and businesses. In addition, it is difficult to store renewable energy as the technology needs improvements, so this transportation infrastructure is vital. A summer day in the UK peaks at 30GW (in the daytime), whereas renewable capacity is currently at 42GW. This is predicted to rise to 46GW by 2017. This means there will be large competition between renewables and non-renewables for energy supply, as Nuclear plants must be kept open 24/7 to see returns on their investments. Surrounding renewable storage infrastructure will need to improve to store the excess supply, making them more reliable and competitive. In addition, it is important to note here that the continuous fossil fuel subsidies in the UK continue to make fossil fuels more competitive than they are in reality, posing a further threat to renewable energy investment.

At present, renewable energy is also by far the cheapest energy source to produce in the UK, especially onshore wind and hydroelectricity. The cheapest of the UK electricity to produce is hydroelectric power, at an average of $0.05 per kilowatt hour (kWh), far below fossil fuels. This is not due to subsidies as some may suggest. Initially, the high risk of renewables as a new untested technology led to high lending rates on investments, but now the lending rates have improved as renewables are becoming more reliable. Combine this with the mass production of infrastructure, and the cost of production has rapidly reduced in the past ten years. According to EY’s renewable country attractiveness index, the UK scored 8th, reflecting the large growth in renewable investment for the UK. The excess supply has also reduced the price of renewables, making them more accessible to the market.

The attractiveness in investments has been aided by policy decisions. To begin, the government announced the The Renewable Heat Incentive which introduced a feed-in tariff to subsidise the cost of heat production from biomass and geothermal renewable energies. Later, in 2013, the government introduced a series of reforms for the UKs electricity market, simply labelled the Electricity Market Reform, that included increasing the price of carbon, also known as the carbon floor price, and setting stricter emissions performance standards to restrict non-renewable technologies. 2014 saw the Contract for Difference policy that obligates the government to pay the difference between an agreed strike price and the market price. If the strike price is higher than the market price, the government pays the renewable energy company to keep the price low. Finally, in March 2019, the Offshore Wind Sector deal was signed, that aims to triple the number of green collar jobs in the industry to 33% by 2030, with a specific focus on encouraging women’s participation in the sector. This works with educational institutions to train new workers. All of these policies have worked to shape the UK discourse towards an encouragement of renewable energy, as well as protecting the niche and making renewables economically competitive. They have been successful; today renewable energies are competitive without the above subsidies.

As Chancellor of the Exchequer, I am obliged to write to you to discuss the UKs current fossil fuel subsidies. I hope to engage you in an alternative possibility for the UKs energy future in a post-Brexit setting that enables a competitive renewable energy sector.

Recent data suggests renewable energy capacity exceeds that required for the UK daily usage in both summer and winter. The capacity stands at 3 times that required and is predicted to grow in the future. This has been promoted through some very successful subsidy programs such as the CfD and the Offshore Wind deal which I commend. However, moving forward large obstacles still restrict the UKs capacity for a low-carbon energy sector that can fulfil the goals agreed in the Paris Agreement, that limits global temperature rise to 2 degrees Celsius.

The UKs fossil fuel subsidies remain the highest in Europe at £10.5 billion annually, which exceeds the £7.5 billion allocated to renewable energy sources. Studies suggest the cost for renewable energy has reduced so rapidly that they are now competitive without these subsidies. Therefore, the promotion of renewable energies is not only necessary for the planet’s health, but is also the most economically efficient allocation of the UKs budget. This will produce a stable energy supply for UK consumers in the years to come, and will maintain a competitive advantage for the UK energy sector within the EU market post-Brexit.

I hope these suggestions to reduce fossil fuel subsidies to maintain the resilience and competitive advantage of the renewable energy sector is seriously considered.