Data on Australian greenhouse emissions is compiled on a quarterly basis and released by the Federal Department of Environment. The data – widely considered to be very reliable – covers a large number of sectors including electricity, transport, agriculture & industry. While the data is usually presented in a report format, members of the public are able to access the raw data sets.

The remarkable aspect of Australian emissions data is not that it is difficult to access or that methods for collecting it are opaque. Rather, it is how successive governments have worked to delay release and present results in a misleading light. Since the Coalition was elected to government in 2013, emissions data for a given quarter is released anywhere between seven months and one year after the fact. Emissions data is always released late on Friday afternoons, and usually Fridays leading into a holiday weekend. The reports produced are thorough but low impact and difficult for the public to digest. Instead of talking about the bigger picture, Government MPs talk about small emissions cuts achieved in a single sector while completely ignoring the unmistakable overall trend: Australia’s carbon emissions are still increasing.

In the absence of honest reporting, it is left to independent experts and keen journalists to interpret the data and present it in a meaningful way, like the graph below produced by Guardian journalist Greg Jericho. In the last year national newspapers have begun to report on emissions data, but this rarely makes it onto network television. Thus, few members of the Australian public get the full story on greenhouse emissions. 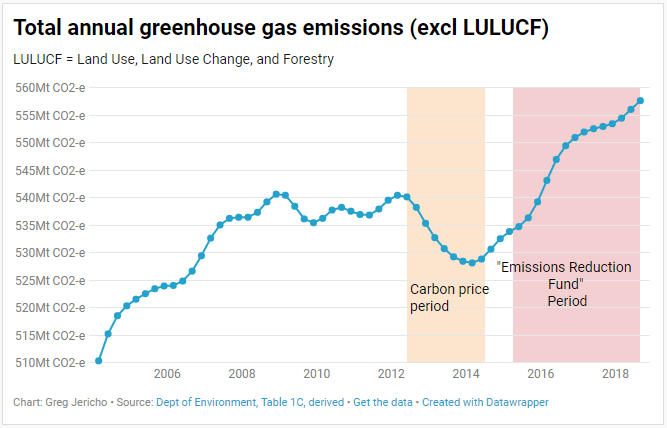 Australia’s greenhouse emissions data makes for damning reading, but sadly the full story is rarely communicated to the public. There is a zero chance the Coalition government will improve their approach to emissions data. A small effort to force their hand was made last year in the Australian Senate when the opposition Labor party teamed up with the crossbench to force all quarterly emissions data to be released within five months.

However, should it win government at the upcoming federal election, Labor has made no promises to overhaul the system of reporting or to make it more high impact – they have only promised to be more prompt with data release. In the meantime, it is left to a handful of media outlets and bloggers to provide honest analysis.

As likely next Environment Minister of Australia we urge you to take this chance and overhaul the way your future department handles the release of greenhouse emissions data. Australia is fortunate enough to have access to reliable emissions data, but under the Coalition it has been released months overdue, and usually just before Australians head off to a holiday weekend. It is also left to media outlets like The Guardian to do helpful analysis, as the Department of Environment’s official report on carbon emissions is thorough but hard to digest for members of the public.

This is a great opportunity to boost public interest in emissions data reporting. In addition to a sector-by-sector approach, a breakdown of polluting companies could be introduced so Australians can easily identify the biggest contributors to greenhouse emissions. Emissions reduction targets could be overlayed on the reporting like KPIs to indicate whether a particular target is on track. At some point Australia will need to account for emissions from its exported coal & gas that is burnt overseas. And the report really needs to promote one simple statistic front and centre: are Australia’s overall emissions falling, or are they not? And if they are falling, are they falling fast enough for us to meet our Paris commitments? Public concern about climate change has never been higher, and now is the time to produce honest, accountable reporting on the state of Australia’s greenhouse emissions.