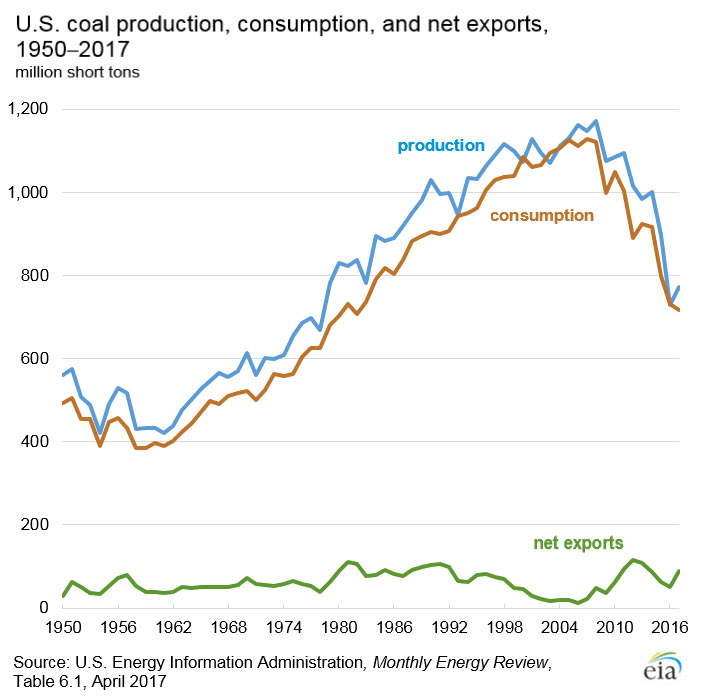 In 2017, the most recent year for which data is available, coal supplied approximately 14% of total American energy consumption, 30% of total American electricity generation. Most of the coal consumed in the U.S. is used to produce electricity, although a small percentage is used in heavy industry. Natural gas and renewables have declined in costs over the past decade and begun to displace coal as a cost-effective energy source. Despite the Trump Administration’s best attempts to bail out the coal industry by reducing environmental and safety regulations on coal production and consumption, coal consumption in the U.S. is projected to continue to decline.

A majority of American coal production comes from five states: Wyoming, West Virginia, Pennsylvania, Illinois, and Kentucky. Half of all coal produced in the U.S. is produced by Peabody Energy Corp, Arch Coal, Inc., Cloud Peak Energy, and Murray Energy Corp. Heavy lobbying by the coal industry has pressured the federal government, namely the Trump Administration and the Environmental Protection Agency, to relax restrictions on coal production and encourage increased production and consumption. As of 2017, the coal industry supported approximately 51,000 coal mining jobs with an estimated 82,000 jobs total. Most of these are concentrated geographically in the states with the highest coal production, creating pockets of the country that could be devastated economically if the coal industry were to fail entirely. This supports the political will to preserve the coal industry, although with targeted job retraining and support systems, the coal industry employees could be transitioned to clean energy or other industries.

Market forces are already phasing out coal in the U.S. as cheaper and more environmentally friendly energy solutions become more widely accessible. Replacing coal mining with industrial clean energy technology production could help to mitigate some of the employment concerns, and a steady ramp up of renewable energy deployment like onshore and offshore wind could replace coal in the U.S.’ energy portfolio. What remains is the political will to encourage this change to take place at a faster rate. Democratic representatives in Congress are putting forth a “Green New Deal” to encourage this transition. The U.S. currently has no plans to phase out coal altogether.

By relying on market forces to suppress coal production and consumption, the U.S. is seeing an extremely slow phase out of coal over time. The U.S. should offer greater subsidies for renewable energy and encourage the continued phase out of coal as a source of electricity.

The New Source Performance Standards Rule implemented in conjunction with the Clean Power Plan was the greatest step taken by the EPA to curb coal emissions in the 21st century. Please withdraw the proposal to roll back the 2015 New Source Performance Standards and instead create tight restrictions limiting the construction of new coal-fired power plants.

The UKs Strategy for CoalExcellent Data Misused by Politicians