In the 1960s there were over 1,000 operational coal mines in the UK; today that number has dropped to ten mines. However, these mines only produce a third of the UKs coal, with another two thirds being imported from Russia (46%), the US (28%), Australia (9%), Columbia (9%), the EU (4%) and the rest coming from various other international sources.

However, the overall consumption of coal in the UK has seen extraordinary declines in the last five years alone. Below is a graph of the UKs coal consumption in respect to other energy sources. 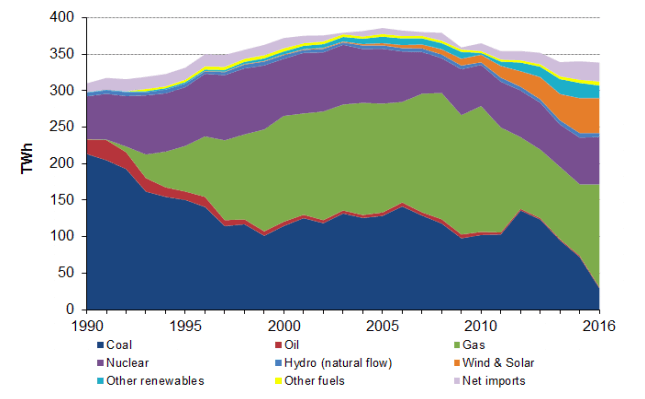 In the second quarter of 2018, coal use was only 1.3 % of total energy consumption in the UK as it is rapidly being replaced by natural gas and renewable energies. Although this is a positive development, constructing coal as dirty energy and natural gas a cleaner alternative threatens our progress towards carbon reduction, as it is crucial to remember that the use of natural gas also releases high volumes of CO2 into the atmosphere. Further, overall energy consumption in the UK has continued to rise despite productivity and efficiency improvements.

There are only eight coal-fired power stations running in the UK today, after the majority of stations closed down in 2015. These are located as such; note there are none remaining in Scotland: 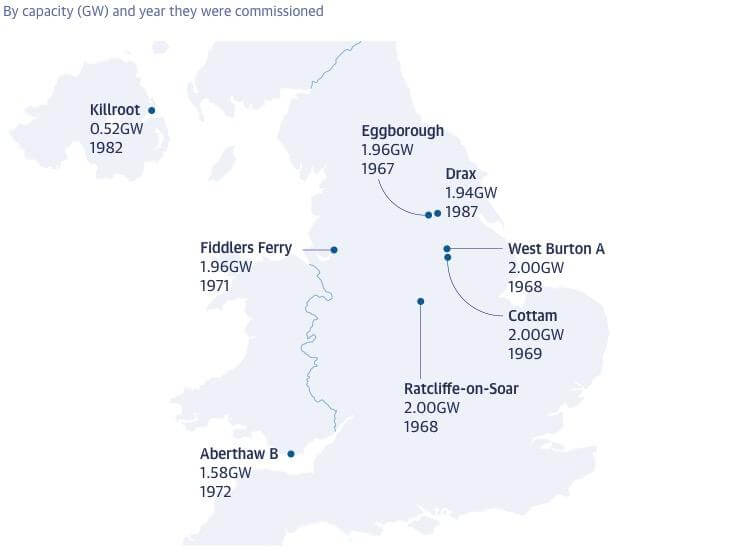 Furthermore, the UK won’t stop there. In 2018, they published a plan to end unabated coal generation by 2025. This involved an emissions intensity limit of 450g CO2 per kWh of electricity generated on coal-generation units. This is the level of CO2 emissions that is produced from natural gas consumption and should therefore redirect investment away from coal to natural gas or other low-carbon energy production. To ensure this doesn’t affect other forms of electricity generation that use solid fuels, such as biomass, the litigation explicitly refers to solid fuels with a thermal capacity of over 300MWth.

To overcome this, companies can co-fire with biomass, because it requires little technological or infrastructural change, being based on combustion. However, they are only allowed to fire sustainable biomass with a low net carbon life-cycle. This would involve biomass that can easily be replenished, such as maize or oilseeds. In line with this approach, Drax, one of the eight UK coal-fired energy-producers, has begun carbon sequestering as of February 2019 from biomass fuels. Carbon sequestering is a process of capturing and storing carbon emissions for re-use, in this case from burning wood. Despite claims from Drax that this will bring carbon emissions into negative figures, they are still unsure what to do with the sequestered carbon. If the UK moved in this direction, it would need excessive land to grow the biomass, beyond the scope of the UK, that would destroy large swaths of eco-systems and rely heavily on transportation costs. Instead I suggest investing in cleaner technologies to begin with that produce less carbon.

The limitations under this regulation don’t come into force until 2025, as the government insists this allows time for the companies to review their energy generation and evaluate the best step forwards for future investments in the energy industry, with minimum disruption to UK prices.

Unfortunately, it is unlikely the UK will be able to match this level of abatement for other sources of CO2 emissions, as a key driver of this process has been the EU Emissions Trading System (ETS) that provides country coded allowances and subsequently trading permits, to CO2 emitting companies. On 28th February 2019, a month before Brexit, the government announced the UK has been indefinitely suspended from the trading scheme, and therefore UK companies will not receive any allowances or CO2 permits for 2019. The release from carbon trading removes CO2 restrictions from UK companies in the form of permits and replaces them with targets that are difficult to enforce. This is a major obstacle to future CO2 abatement and hopefully will be resolved with the EU when/if a deal is negotiated.

The UKs current coal consumption has drastically reduced and continues to decline, which is an excellent response to climate change and the need for a green future. It is also commendable how far renewable energy development has come in the UK, now responsible for nearly 30% of energy consumption. However, the continued heavy reliance on natural gas should not be a permanent feature of the UKs energy supply complex. It is a cleaner alternative to coal, but still produces high rates of CO2. Further, if the UK wants to see a reduction in fossil fuel consumption, it will need to continue ensuring incentives and economic pressures, by remaining in the EU ETS. This will be crucial to ensure the same reductions in fossil fuels occur as we have seen with coal, and the government should prioritize this necessity in the Brexit negotiations if it is to remain competitive in the energy industry and able to reduce its CO2 emissions in line with the Paris Agreement which it is still legally bound to do.

I believe your commitments made to CO2 reduction are commendable. Hopefully investments made in CO2 sequestration will make it an accessible feature of energy generators across the UK and be able to lead the way globally in processes that produce large volumes of CO2.

However, there remains several concerns with biomass that need to be considered. Firstly, for the UK to rely on biomass as a ‘carbon neutral’ alternative to fossil fuels would require excessive land to grow the crops or forests for biomass, and beyond the scope of the UK. This would make the UK reliant on trade of forests from external lands and is not a sustainable solution that can be adopted world-wide as there is not enough land. Secondly, the CO2 produced does not equate to the CO2 produced, due to the time it takes to grow the forest back after it has been cut, which would otherwise have been naturally sequestering CO2, and is therefore not carbon neutral. It also depletes many ecosystems, reducing them to simplistic landscapes and reducing biodiversity.

Finally, there are many studies that present biomass as a major source of increasing international food prices for the three main staples; wheat, maize and rice. In effect, it integrates the relatively stable food market into the volatile energy market. Attaching fuel prices to crops increases the price of food. Further, it reallocates land from crop production in an age of accelerating population growth. Worst, the food price disproportionately effects the world’s poor and small-scale farmers because a larger percent of their income is spent on food, nearly 90% for many rural poor.

Therefore, instead of investing heavily in biomass energy generation, investments should focus on renewable energies instead. The move away from coal needs to go a step further and move away from solid fuels more generally. I see Drax has begun to also invest in Hydro, but to a much lesser extent than biomass. Therefore, I suggest this should be revised to focus future investments solely on Hydro power, as a sustainable solution for future global energy consumption that doesn’t affect the world’s poor.

LinkedIn: Will Gardiner, CEO of Drax