According to the latest data published by the Ministry of Energy and Economics, 42.1% of Germany’s energy was produced by renewable resources. Initially, the country’s 2020 target for renewable resource energy production was set at 35%, meaning they are roughly 18 months ahead of schedule. 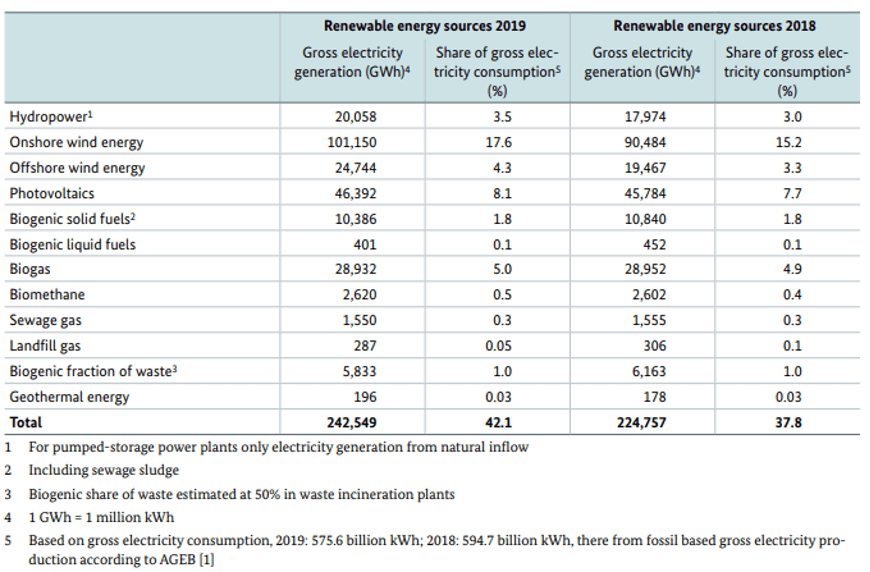 Germany managed to produce more than half of its electricity from renewable resources just in the first half of 2020. In July of that same year the Frauenhofer Institute published a report of the division of energy sources. This data is depicted in the following image:

Wind and power saw the largest increase of production now making up approximately 30% of Germany’s electricity. In February, due to strong wind storms, the share of wind power in electricity production managed to reach 45%.

The large share of renewables in Germany’s electricity production represents a major increase within the last decade, much larger than in previous years. After German reunification in 1990, renewables counted for 3.4% of Germany’s electricity production. Since then, this percentage has increased from 6.3% in 2000, 10.5% in 2005, and 17.1% in 2010. 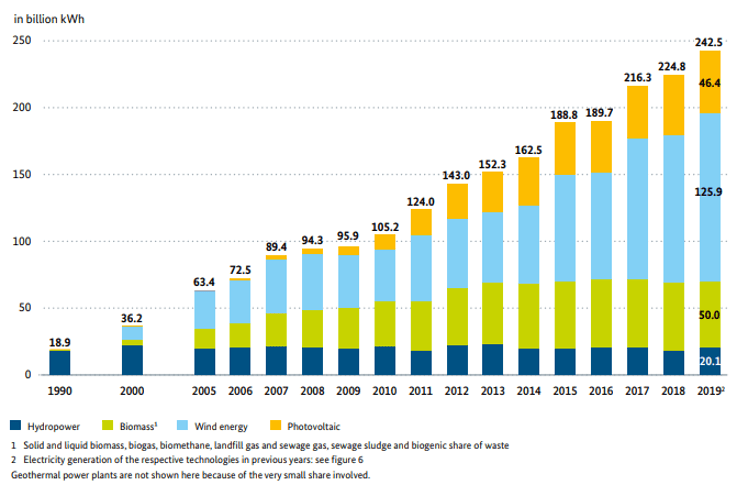 Source: The Federal Ministry of Economic Affairs and Energy, 2020

Although around 12% of Germany’s electricity is based on nuclear production, this method is being discontinued with it ultimately phasing out by 2022. As part of its new sustainability strategy, the country also plans to phase out coal by 2037. It is apparent that the share of coal is decreasing, having been partially replaced with renewables and natural gas. According to the Frauenhofer Institute, in the 12.9% less power was produced using coal and 36.9% less from lignite within the first half of 2020.

In regards to trade, Germany is a net exporter of energy according to the data of the federal agency for energy market data. In total, Germany exported 3,252.9 Gigawatt hours (GWh) more electricity than it imported in October 2020. The year before it was also a net exporter at 4,217.6 GWh but since then, levels have decreased 22.9%.

In 2010 Germany declared a gradual, yet comprehensive, change of transition towards renewable electricity production called “Energiewende” – literally, Energy Transition. It depicts a set of legal and administrative measures, as well as infrastructure spending guidelines, in order to increase the share of renewables in electricity and energy production and gradually phase out nuclear and coal. The commitments and measures are implemented through different laws and strategy papers approved in the last decade and are amended quite often, depending on developments in both practice and knowledge. The Renewable Energies Act, the main policy instrument relevant for electricity production, was enacted in 2014 and amended in 2017.

There are still several hurdles facing Germany in their pursuit towards expanding renewable energy, which need to be addressed in order to reach their goal of 65% renewable electricity by 2030.

First, in recent years the share of solar electricity was not progressing as well as expected. That can be due to several market constrains, including an industry cap which was finally removed recently, as well as EEG levy on small producers; this makes it an economically unviable option for many. Experts suggest that better taxation and investment schemes could increase the access of small and private producers to photovoltaic technology. The German Solar Energy Association also suggested that Germany’s hesitance to approve the use new storage technologies make it more costly for new actors to join this market.

Another hurdle is phasing out coal, in particular lignite, which several regions base their economies on. Phasing out lignite mining means many jobs will be lost in already poor regions in former East Germany. Support packages directed towards creating jobs in these regions are currently being discussed.

A larger structural challenge facing Germany is replacing the phased out power, namely coal and nuclear, since large production capacity must be created in a short time. It is not yet clear whether the government will ensure the capacity to be replaced by renewable production, if or additional gas-powered plants will be built.

Wind power is on the rise in Germany, yet a lack of sufficient grid infrastructure, especially high voltage connection between North and South, makes it an inaccessible energy source for the entire country given the vast majority of wind installations are located in the North. These kinds of expansions face significant public objection.

Report of the working group for renewable energy and statistics (on the website of the Energiewende plan): https://www.erneuerbare-energien.de/EE/Navigation/DE/Service/Erneuerbare_Energien_in_Zahlen/Arbeitsgruppe/arbeitsgruppe_ee.html