Japan’s total electricity consumption in 2018 was recorded to be 1012.75 Terawatt hours (TWh), an increase of 22.03% compared to 1990 levels. This figure had been steadily increasing since 1990, ultimately reaching a peak in 2010 at 1123.75 TWh (IEA, 2020). Ever since, electricity consumption has been decreasing slightly; this trend can be attributed to energy efficiency gains, conservation efforts, and advancements in renewable energy by the Japanese government. In 2019, Japan was the world’s fifth-largest energy consumer. During this period of declining energy consumption levels, the country’s gross domestic product was able to grow by 9% (Zissler, 2019). 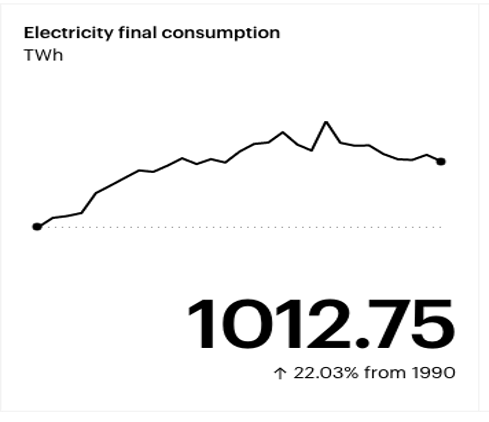 Fossil fuels make up the majority of electricity consumption in Japan. Oil serves as the country’s primary’s energy source and its share of energy consumption has declined from approximately 80% in the 1970s to just 40% in 2019 as a result of an aging population, higher energy efficiency measures, and an expanding fleet of hybrid and electric vehicles. However, coal (26%) and natural gas (21%) have continued to account for significant shares of total energy consumption, with the latter ushered in as the preferred fuel of choice to replace the nuclear shortfall (3%) following the 2001 Fukushima Daiichi nuclear disaster. Renewable energy, particularly solar power, has grown as an alternative fuel source but it only constituted less than 10% of Japan’s energy consumption in 2019 (EIA, 2020). 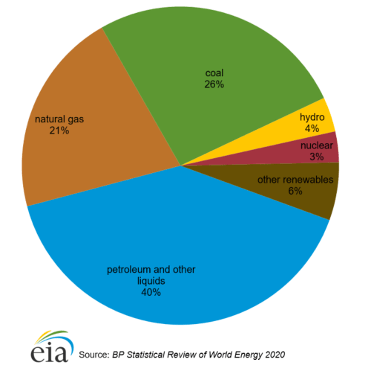 The energy self-efficiency ratio of Japan in 2017 was 9.6%, a generally low level when compared with similar OECD countries (METI, 2020). Japan lacks key natural resources and relies heavily upon imported energy to secure a stable supply of energy. For example, in 2018, Japan’s dependence on imports were 99.7% for oil, 97.5% for liquefied natural gas, and 99.3% for coal (METI, 2020). In the same year, around 88% of crude oil was imported from Saudi Arabia, the UAE, Qatar, and Kuwait. Japan imported a majority of their coal was from Australia whereas liquefied natural gas was sourced from more well-diversified areas such as Australia, Asia, Russia, and the Middle East. In contrast, Japan exports close to zero sources of energy.

One of Japan’s major policies intended to increase the distribution and use of renewable energy has been the Feed-in Tariff (FIT) scheme launched in 2012 (revised in 2016). As Kimura (2017) explains, under the FIT scheme, “The government sets procurement conditions of renewable electricity (period and price) and obliges the utilities to purchase it. These schemes reduce the risk of failing to recover investment, hence likely to lead to more investment.” Under the FIT scheme, the share of renewable electricity increased from 9% to 15% between 2011 and 2016. While this was an important step, renewable energy has yet to catch up to other forms of fossil fuels. Furthermore, solar power accounted for 96% of the electricity produced under the FIT in the first three years after the system was introduced. The system can further be strengthened by focusing on currently underdeveloped fields of renewable energy like wind energy.

Since the early 2000s, Japan has strongly emphasized employing policies that promote energy efficiency. From promoting the installation of energy-saving equipment (such as sharing fuel-cell co-generation systems in households) to implementing energy-management systems in industrial and commercial sector production, Japan is on track to achieving an energy consumption efficiency improvement of 35% in 2030 compared to 1970 levels (Ito, 2018).

We recommend the Japanese government provide economic stimuli towards the solar and wind power industries so as to increase the country’s renewable energy share in the next few years.

Katsunobu Katō, Chief Cabinet Secretary and Chair of the Committee on the Growth Strategy