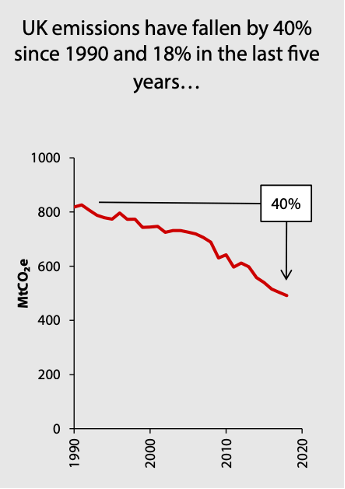 According to research from the International Energy Agency (IEA), total greenhouse gas (GHG) emissions in the UK amounted to 339.2 MtCO2e in 2019. This signals a decline from 2018 emissions levels of 352 MtCO2e, which—at the time—comprised of approximately 1% of the world’s total. Key contributing sources to former 2018 levels were oil and natural gas (45%), coal (10%), transport (35%), electricity and heat production (22%), and residential power

Since 1990, the UK has seen a consistent decline in overall CO2 emissions; the IEA estimates the region currently produces around 30% less than levels from thirty years ago (2019). In the last 12 years, the decrease has been more pronounced and made up for a 22% decline compared to 1990 levels. According to the Department for Business, Energy & Industrial Strategy (2020), GHG emissions have fallen by 43% (342.4 MtCO2e) from 1990 to 2018 with the largest contribution stemming from the electricity, gas, steam and air conditioning supply (144.1 MtCO2e). The Climate Change Committee’s 2019 Progress Report Summary for the UK (image on the right) states the median figure for GHG emissions decline since 1990 lies at 40%.

Of the myriad of UK policies aiming to reduce emissions, few are studied critically in terms of their singular impact on emissions reduction. However, each does provide an overall indication of their correlation with climate change mitigation efforts.

The EU ETS began in 2005 as the world’s first and largest carbon market with aims to limit emissions from heavy energy-using installations and airlines, covering around 45% of the EU’s total emissions. The UK remains a part of the EU ETS until January 2021with some 1,000 participating installations such as power stations, oil refineries, offshore platforms, and industries producing iron, steel, cement, and lime, as well as 150 UK-administered aircraft operators. According to the Climate Change Committee 2019 Progress in Reducing UK Emissions Report, emissions in the traded sector were 129 MtCO2e, while shares of EU ETS cap was 157 MtCO2e. Thus, the UK lost 28 MtCO2e of its allowances to the rest of the EU. The UK will continue its own ETS system independent of the EU, yet it will have to establish a Linking Agreement.

The Environment Bill of 2019-2021 seeks to improve and protect the environment through a number of governmental and industrial efforts. It aims to support the Office for Environmental Protection, promote waste and resource efficiency, safeguard air and water quality, recall products that fail to meet environmental standards, protect nature and biodiversity, and uphold conservation covenants. An assessment conducted by the Department of Environment, Food and Rural Affairs (DEFRA) stated the overall impact arising from primary legislation as having a cross-cutting emissions reduction effect. Actual CO2 equivalent changes remain unquantified with one exception: the impact of the bill in the waste and resource efficiency sector was evaluated to cause a reduction in GHG emissions of 20 MtCO2e. Politically speaking, the bill was criticized for falling short in supporting Natural England, an agency regarded as being in a critical state.

The 2008 Climate Change Act established a legally binding target for the UK to reduce GHG emissions to net zero levels by 2050. Using a carbon budgeting system that caps emissions over 5-year periods, it was devised to help the UK stay on track towards its 2050 target. Since the Act was introduced, the UK has experienced notable emissions reductions. The UK successfully met both its first (2008 to 2012) and second (2013 to 2017) carbon budgets and is currently on track to meet its third (2018 to 2022). Meeting the fourth and fifth carbon budgets will require an acceleration of emission reductions; so far indicators show that the UK is not on track to meet these upcoming targets. As such, performance on the 1st, 2nd and 3rd targets should not lead UK policy and legislative makers to grow complacent in implementing climate change mitigation action.

The National Adaptation Programme (NAP) was first introduced in 2013 to lay out a strategy for adaptation and focus on necessary actions to address urgent risks in order to make the region more resilient to climate change. CCC findings revealed the priority given to adaptation, including through the institutional and support framework in England, has been eroding over the past ten years. The summary of findings indicates that the government “has failed to increase adaptation policy ambition” and many national plans and policies do not address current risks. Although these do not constitute quantifiable change in emissions as tied to the NAP, the message is that the UK’s government must strengthen climate governance and institutional support of climate policies.

Next month, the UK-UN climate summit will take place on December 12 for the 5th anniversary of the Paris Climate Agreement. A series of letters across the political and social spectrum were published by various groups of health professionals, campaigners, MPs, and academics calling on government to take action for this summit. Meanwhile, the Scottish Government has established a new target for offshore wind capacity to power 8 million homes by 2030.