2020 was predicted to be a splendid year for tourism in Japan.

Since Tokyo would be hosting the Olympic and Paralympic Games, the government had aimed to attract a record-high 40 million visitors. Even in January, hotels, ryokans, and airlines were eagerly rolling out promotional campaigns and preparing for an influx of travelers. However, as the COVID-19 pandemic devastated the globe, the Games were postponed to 2021 and travel bans were implemented everywhere. Japan’s tourism industry was dealt a serious blow.

As the UN World Travel Organization (WTO) states, the tourism industry refers to all activities providing infrastructure, products, and services related to the short-term movement of people to countries or places outside their usual environment for leisure, business and other purposes.

A paper titled “The carbon footprint of global tourism,” published in the research journal Nature Climate Change in May 2018, stated that the carbon footprint of global tourism accounted for 8% of global emissions. Researchers conducted a global survey of the emissions embodied in transportation, food and beverage, infrastructure, and retail services in 160 countries. They found that tourism’s global carbon footprint had increased from 3.8 to 4.5 gigatons of carbon dioxide equivalent (GtCO2e) between 2009 and 2013. Most importantly, the paper stated that as the rapid increase in tourism demand was outstripping the decarbonization of tourism-related technology, tourism would continue to constitute a growing part of the world’s greenhouse gas (GHG) emissions (Lenzan, 2018).

In particular, according to the report “Carbon Footprint Evaluation Based on Tourist Consumption toward Sustainable Tourism in Japan,” Japan’s total emissions related to the tourism industry was approximately 136 million t-CO2 per year, with travel and souvenirs contributing the most. (Kitamura, 2020). 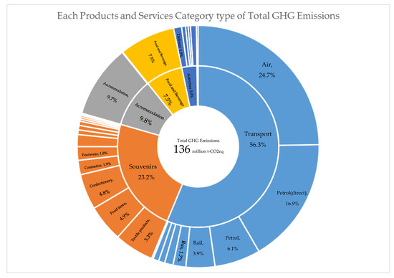 This is because, in the past decade tourism has been one of the fastest-growing industries in Japan. From 2009 to 2019, the Japan National Tourism Organization (JNTO) reported an increase from 6.8 to 31.9 million annual visitors.

However, as the Coronavirus spread in March, the JNTO reported a 93% plunge in overseas arrivals to 194,000. Economists predicted that the number of foreign visitors to Japan would drop 30% to 80% for the full year (Sugiura, April 2020). Later on, in May, as emergency bans were lifted and the economy slowly began to recover since, the government began to plan for a “go to” campaign to direct a wide range of subsidies and stimulus packages towards domestic tourism, as it still has entry bans in place for 111 countries. Specifically, the government plans to spend nearly $16 billion for a “go-to” campaign to provide coupons and meal tickets at hotels, inns, souvenir shops, and restaurants. However, not only is this campaign facing criticisms of an excessive budget for administrative and office costs, it includes no measures aimed towards fostering sustainable tourism.

A solution for reducing tourism’s carbon footprint is by implementing regulations and incentives to encourage low-carbon options, particularly in regards to the transportation sector, which accounts for more than 56% of tourism related GHG emissions. For example, the government should provide support for the electrification of public transport, private passenger, and freight transport. In addition, this could open up employment opportunities as well. According to the report “Jobs in green and healthy transport: Making the green shift,” published by the ILO and UNECE, promoting green and healthy transport in the aftermath of the COVID-19 pandemic “could create up to 15 million new jobs worldwide.”

If the government hopes to increase tourism levels to and beyond pre-pandemic levels, it is important that they take into account the subsequent increase in carbon emissions. Currently, the government is not taking into consideration the environmental effects of any current or proposed economic recovery programs.

While we acknowledge that it is necessary to prioritize stimulating demand for tourism as it constitutes an integral part of the economy, we urge you to include measures to lower the carbon footprint of the tourism industry as a part of the economic recovery plan. We would like to remind you that tourism in Japan is highly vulnerable to climate change, including impacts due to extreme weather, water shortages, biodiversity loss, and damage to attractions among others. Thus, it is imperative that steps today to increase travel and consumption will not compromise the progress on climate action.