Spotlight Activity: The Social Cost of Climate Change in Japan

The effects of climate change on the population in Japan mainly involve health risks associated with heat waves and extreme weather events such as floods.

Heat illness is a direct and immediate impact of heat waves, affecting especially the most vulnerable groups such as the elderly and children. It also affects people who work outdoors in sectors such as agriculture, fishery, construction. In Japan, the number of heat illness-related fatalities linked to climate change has been increasing steadily and are projected to increase further in future decades, especially in eastern and northern Japan.

The “Climate Change Adaptation Law” is a new law enacted on June 6th in 2018, which aims at legally defining Japan adaptation strategy and promoting it in cooperation with local governments and the private sector.

The law provides for adaptation measures specific for heat waves implemented by the Japanese government including: issuing alerts about upcoming heatwaves and spreading information on necessary measures to be taken to prevent illness. To protect children, a vulnerable population group, the government is reaching out to organizations such as the Board of Education to help schools take measures that mitigate children’s exposure to excessive heat. As for the workers in agriculture, forestry and fishery industries, the government plans to make efforts to reduce the exertion level of their work by upgrading the use of labor-saving equipment, such as robotics. Additionally, promoting measures to prevent heat illness at the workplace will target workers in the manufacturing and construction industries. 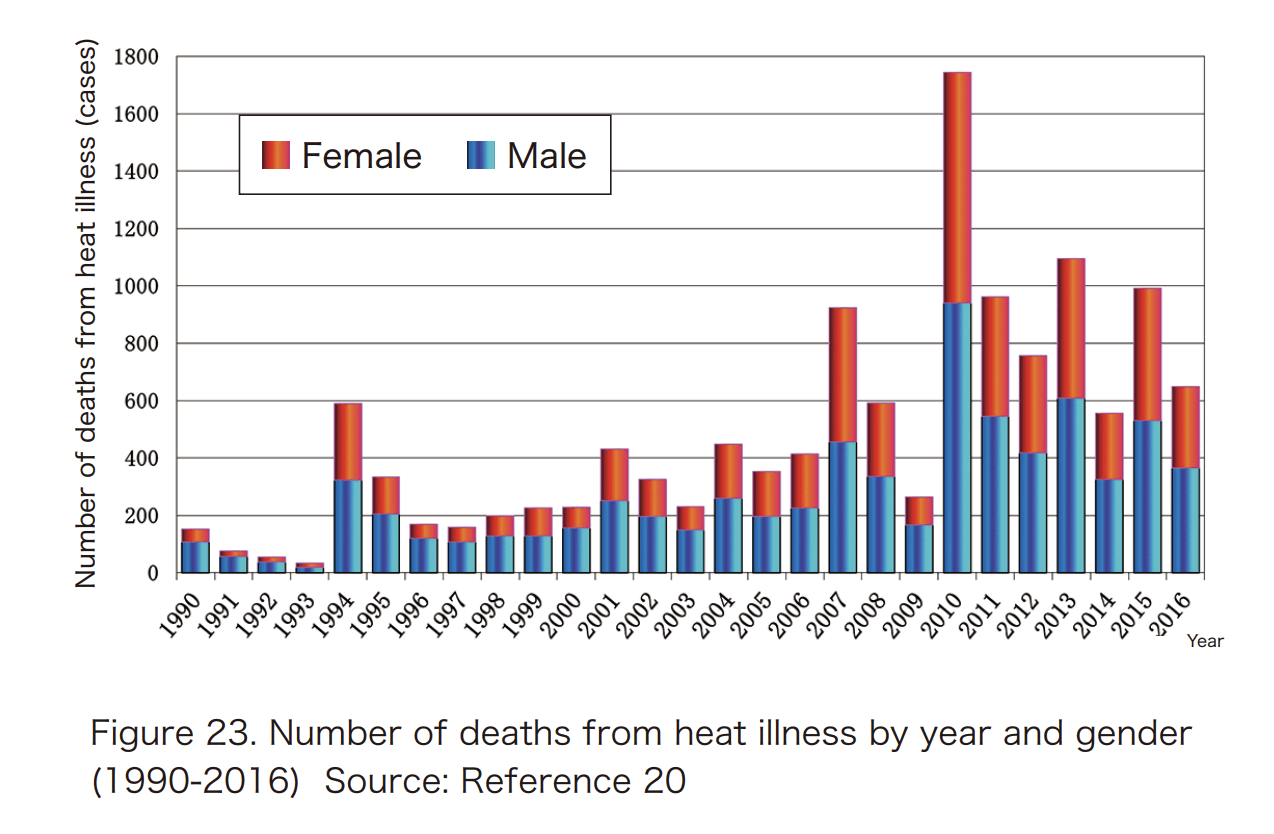 Heavy rainfall events and water disasters such as floods inland water and storm surges  are already occurring almost every year in Japan. According to the most recent projections, these kind of events will increase significantly by the end of this century. Extreme weather events such as floods are likely to affect people living in the countryside and close to rivers and canals. Within this group of people, the elderly may be the most vulnerable when it comes to evacuating an area at risk with speed.

Affected groups: Population living in the countryside, especially the elderly

In order for local governments, businesses and residents to prepare for potential natural hazards, the government will provide detailed disaster risk information including a variety of scenarios for different magnitudes of disaster scale and risk. Local organizations will then prepare evacuation and emergency plans, including pre-disaster initiatives to facilitate evacuation.

Although in recent years there has been an increase in climate adaptation plans made at both the national and local government level, the majority of the plans are still general in nature. There is a lack of personnel with scientific and technical knowledge to assess the impact of climate change and to create detailed action plans at the local level. Additionally, a system for evaluating the effectiveness of the measures in place is still needed.

Dear Minister of the Environment,

We recommend that you create a more robust and detailed climate change adaptation plan, especially at the local level and with special consideration for vulnerable groups, based on specialist scientific and technical knowledge. Additionally, we recommend that you implement indicators to evaluate the effectiveness of the efforts.

Ministry of the Environment Government of Japan

The Social Costs Of Climate Change Will Particularly Fall On The Coastal Urban Poor And Forest Dependent PeopleMexico’s Social, Economic And Geographical Characteristics Make The Country Highly Vulnerable To The Negative Impacts Of Climate Change