Spotlight Activity: The Cost of Climate Change in Germany

In 2018, Germany experienced one of the most devastating droughts of the last century. By June of that year only 47.4 liters per square meter rain had fallen, an amount that was last exceeded in 2006 and before that in 1976. Due to unusual warm temperatures nationally, farmers were forced to harvest much earlier than expected and the outcomes were unsatisfactory. Compared to the previous year’s income, a loss of 1.3 million tons of barley were reported by the farmers’ association. Similarly, potato production and wheat were affected with a loss of 40%. The estimated loss varied from region to region. The greatest deficits were, however, recorded in the east and the north of the country. A  study released by the Ministry for Environment stated a total loss damage worth € 770,- million ( US $867,-). The prediction for 2019 is not better and the current weather conditions suggest the trend will continue and worsen.

Figure 1 Overview of soil affected by drought: a) Oberboden (topsoil) the first 25 cm. b) Gesamtboden (the whole soil) up to 1.8 m depth. c) Waldbrandgefahr (Likelihood of wildfires) (Article by Stuttgarter Zeitung, 18 July 2018) 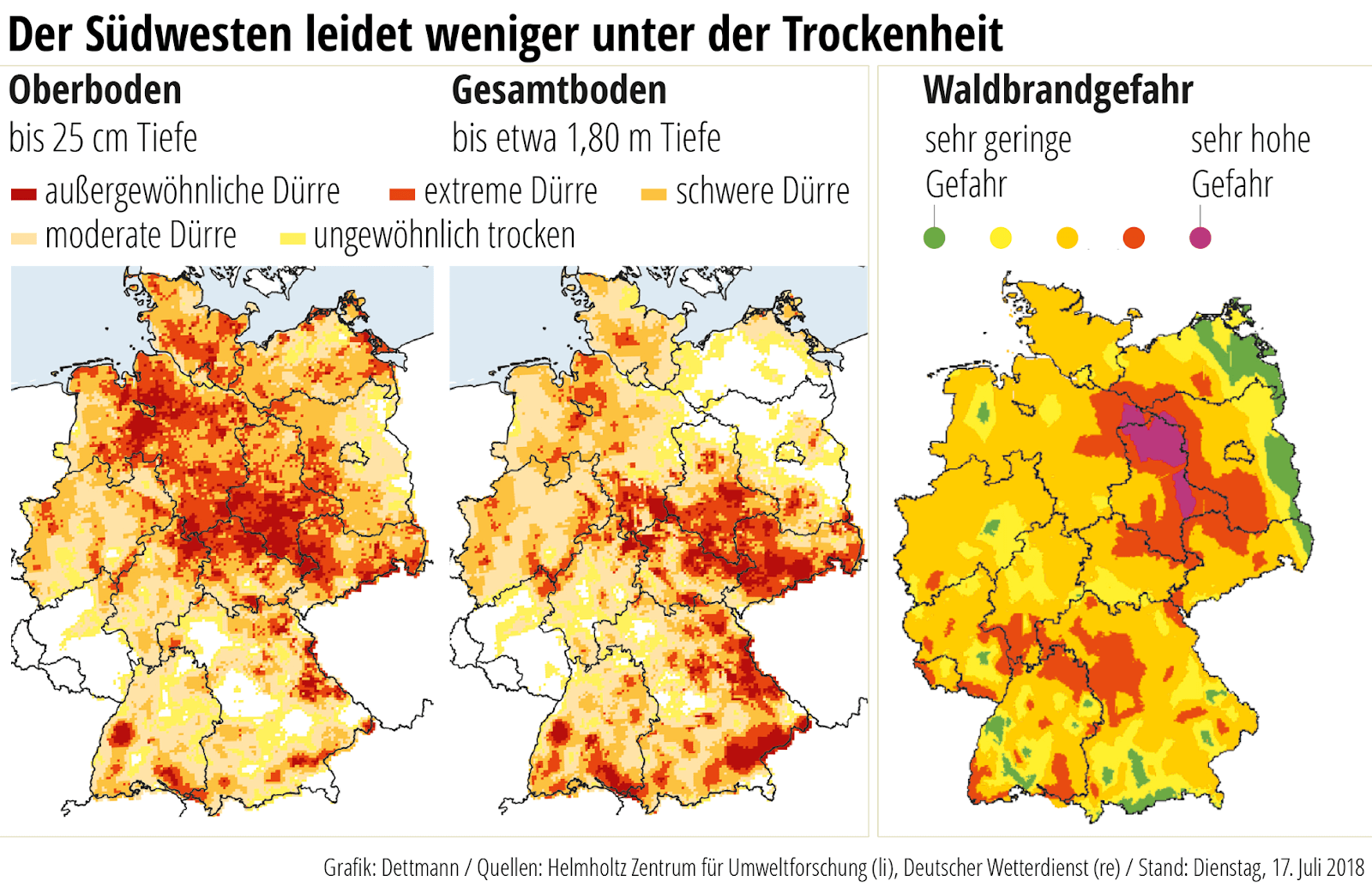 This year the risk for forest fires is extremely high due to the lack of precipitation. As of June 2019, more fires than usual were reported to the emergency centres increasing the risk for national disasters. Already in 2018, the number of forest fires was four times higher than previous years and exceeded any maximum since 2003. 1,708 forest fires were reported in 2018 leading to a loss of 2,349 ha, which is 1,900 ha more than in 2017. Of concern are also the peat lands throughout Germany, which may cause an increased number of forest damaging vegetation, crops and being a risk to all citizens living close to locations with peatland. In 2018, a great area of peatland within one of Germany’s biggest wetlands was initiated by military practices, releasing 500,000 tons of carbon dioxide into the atmosphere. Numerous people, living close to the region were affected by air pollution over months and weeks were required to gain control over the extent of the fire due to subsurface fires on peatland.

Figure 2. Aerial Photograph of the 2018 peatland fire in Germany. 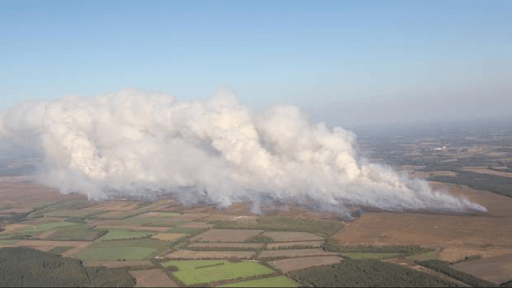 From the above, it becomes obvious that every citizen in Germany can be affected by climate change, but it is particularly farmers and people living in rural areas which are prone to natural disasters. Mitigation and adaptation measures are necessary in order to maintain people’s wellbeing in those areas. Particularly, the eastern and northern part of the country should be looked at more closely as it is in these areas were the primary resources are obtained, being largely dependent on the weather and a stable climate.

Although being more resilient to natural disasters, the citizens particularly in the larger cities located inland are suffering from more and more air pollution. The increased heat periods have led to so-called heat pockets where the air is captured and maintained above the cities. Particularly, the older population group and people suffering from asthma and respiratory problems suffer from the still air. In 2003, being the greatest heat period in Europe and Germany led to the death of 7,000 people in Germany alone. The intensive use of motor vehicles in Germany has led to prohibition measures in cities like Stuttgart to reduce the number of fine particles in the air. However, the commuters that work in Stuttgart but live outside of Stuttgart are again affected by these mitigation measures and protests are increasingly being reported in Germany.

From the above it must thereby be concluded that people in rural areas and in cities are prone to climate change but in different ways. However, the city population has more options to address the situation by increased use of air conditioning, usage of public transport and better access to health facilities. It is the rural population, particularly in the east and north who are suffering from climate change but also from the absence of proposed mitigation measures, climate laws, and regulations that are now being implemented by the federal government.

The German government is aware of the existing effects that climate change has on the country, the people and particularly on the economy. The prohibition measures of motor vehicles in cities when the threshold of the fine particulates is effective but more needs to be done. Public transport needs to be extended and improved in order to reduce risks to the rural population. Furthermore, better regulations and more work needs to be done in the land use sector. Farm area subsidies should be given only to those who consider alternative farming methods that help adapt and mitigate climate change.

The Minister of Agriculture and Nutrition is encouraged to invest and promote climate mitigation measures in the agricultural sector. The dry periods which have increased in length and severity will not stop in the near future. Greater mitigation and adaptation measures need to be implemented if Germany is to avoid substantial losses both to people’s livelihood directly and to the national GDP. German taxpayers will not be willing to pay for reimbursement and subsidies for the farmers over a long-term period. More resistant crops need to be considered for planting and a better farm landscape is necessary to save all excess water in a well-functioning irrigation system. Contour bunches and trenches, in addition to percolation farms on t as shown below could easily be added to working farms.  Farm area subsidies should be given only to those who consider alternative farming methods that help adapt and mitigate climate change. 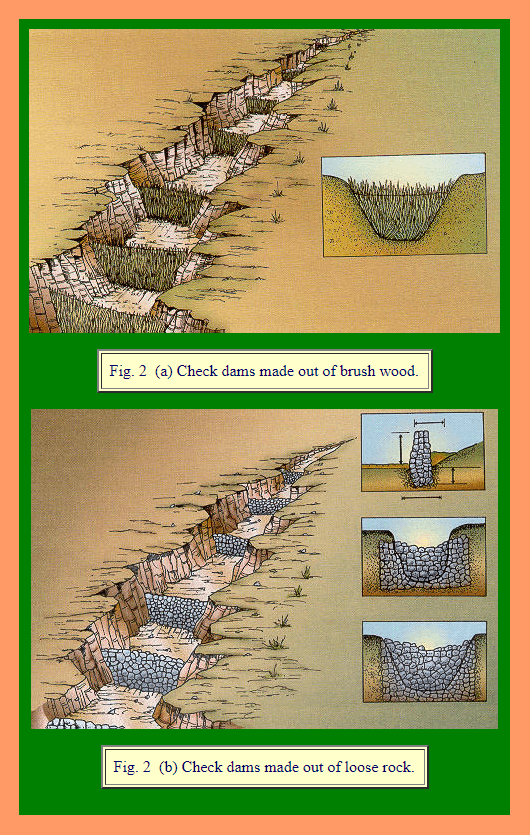 Moreover, the mayor of Stuttgart Fritz Kuhn is once again encouraged to think about the climate consequences of those commuting from the countryside. People commuting in and out of the cities should be provided with free parking outside the city and free public transportation within the city on days where the number of particles is exceeding the threshold. Likewise, the city should become more pedestrian and cycle friendly to encourage the use of alternative transport methods in the city.

Federal Minister for Food and Agriculture

Ministry of Food and Agriculture

Article on heat pockets in cities.

Article on fires in peatland from 2018

Link to article on harvest loss 2018

Article on number of forest fires in Germany: