According to The Greenhouse Gas Inventory Office of Japan (GIO), the main factor for the lower emissions as compared to FY2016 is the decrease in energy-related CO2 emissions. This decrease comes as a result of an increase in the share of non-fossil fuels within the domestic energy supply brought by the wider adoption of renewable energy and the resumption of nuclear power plant operation.

The Greenhouse Gas Inventory Office of Japan (GIO) was established in July 2002 in the Center for Global Environmental Research (CGER), the National Institute for Environmental Studies (NIES). GIO develops the GHG inventory in cooperation with private consultant companies under a contract with the Ministry of the Environment (Figure 3). Before preparing GHG inventories, GIO collects data from relevant ministries, agencies and organizations to estimate emissions and removals. Based on this data, together with other data from different publications, GIO then compiles the GHG inventory. This compiled inventory is annually submitted to the UNFCCC Secretariat through the Japanese Government. This inventory serves as the official data which are reported internationally.

It should be noted that Japan has launched a new satellite (IBUKI-2″(GOSAT-2) that can be used to collect climate-related data, not just in Japan but throughout the world.

Note: Japan’s fiscal year is from April 1 to March 31. 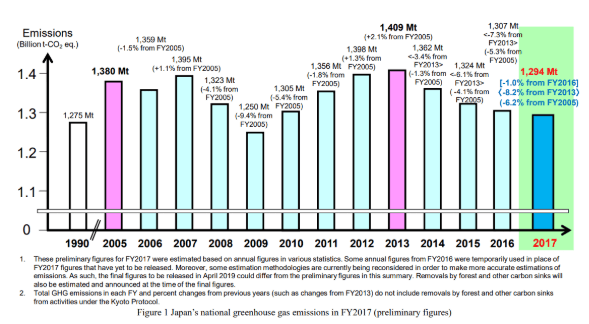 93 percent of CO2 emissions excluding industrial processes and waste treatment are energy consumption. Table 2 shows the source of energy-related emissions. Of the total emissions, household emissions account for about 20 percent, and the remaining 80 percent are from corporate and public sectors. 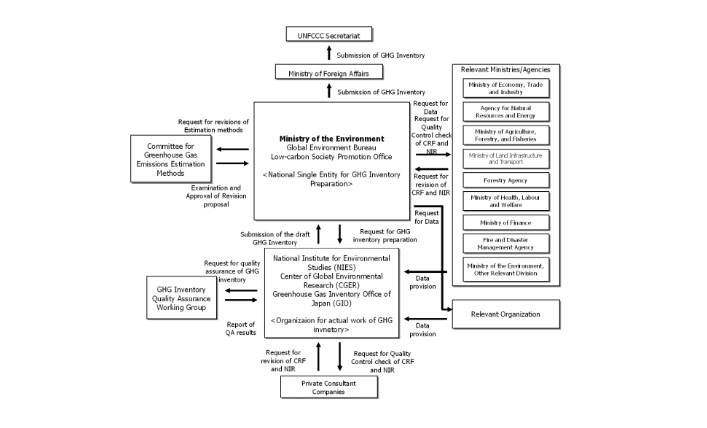 Japan’s data can be evaluated as extremely useful, reliable, and relevant.

Estimation methodologies for the GHG inventories are required to be in line with the Revised 1996 IPCC Guidelines for National Greenhouse Gas Inventories (Revised 1996 IPCC Guidelines), which was made by the Intergovernmental Panel on Climate Change (IPCC), and Japan’s estimation methodologies are basically in line with these guidelines. In order to enhance transparency, consistency, comparability, completeness and accuracy of inventory, Japan also applies the Good Practice Guidance and Uncertainty Management in National Greenhouse Gas Inventories published in 2000 (GPG (2000)) and the Good Practice Guidance for Land Use, Land-Use Change and Forestry published in 2003 (GPG-LULUCF).

The role and the responsibility for each entity in the inventory preparation process are clarified in Japan’s national system. The relevant entities are MOE, GIO, relevant ministries, relevant agencies, relevant organizations, the Committee, selected private consulting companies and the QAWG. The QC activities (e.g., checking estimation accuracy, archiving documents) are carried out in each step of the inventory preparation process in accordance with the GPG (2000) and the GPG-LULUCF in order to control the inventory’s quality.

We appreciate that our country’s greenhouse gas emissions data is very useful, reliable and effective. In terms of monitoring greenhouse gas emission data globally, it is also measured on the ground and in aircraft, but depending on the location the equipment differs and the points are limited. Satellite observation has a strength of being able to measure continuously with the same scale throughout the world. We expect that “IBUKI-2″(GOSAT-2) launched in October 2018 can contribute to the world by grasping the actual conditions of greenhouse gas emissions and verifying the reduction measures. Japan should show leadership in technological innovation and the formation of international observation networks.