Latest EU greenhouse gas (GHG) emissions data cover the year 2017 and were published in December 2018. Total emissions in 2017 were estimated to be 4466 Mt CO2e. EU GHG emissions decreased by 0.4 percent in 2016 compared with 2015 (and by 0.6 percent if emissions from international aviation are excluded).

The 10-year period between 2004 and 2014 saw an almost continuous decline in EU GHG emissions. Since then, emissions have remained more or less constant. By 2016, total GHG emissions in the EU (excluding land use, land use change and forestry – LULUCF) decreased by 1 279 million tonnes of carbon dioxide equivalent (Mt CO2e), achieving a GHG emission reduction of 22.4 percent below 1990 levels. Preliminary data reveal that emissions in 2017 increased by 0.6 percent compared with 2016. This brings the EU-wide reduction to a level 21.9 percent below that of 1990. 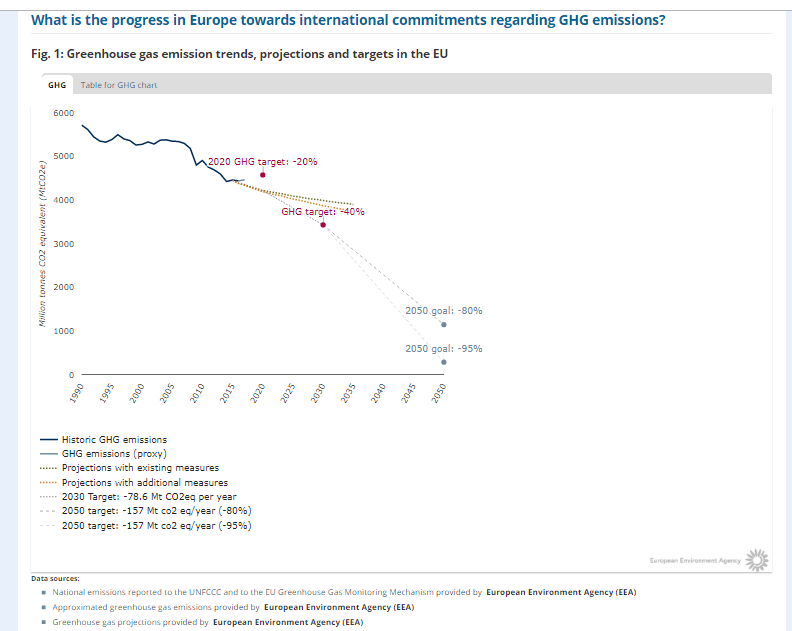 Emissions data for EU countries is provided on a regular basis by the European Environment Agency a European Union agency that has for mission to provide reliable and independent environment-related data. EEA aims at promoting sustainable development by providing useful, targeted, independent, and reliable data to decision-makers and to people in order to improve the European environment.

The European Environment Agency provides relevant and comprehensive data set on GHG emissions trends, projections and targets in the EU, country by country as well as sector by sector. It is a useful tool available to anyone and free.

Although the data provided are useful, reliable and valid, there are not truly up-to-date. Indeed, in April 2019, users can only access to 2017 data and predictions.

We would like to express our support to the work provided by the European Environment Agency as we think it offers tremendous help to decision-makers, development professionals and public. In this regards, we would like to encourage the EEA to further increase the data availability by trying to publish more recent data.