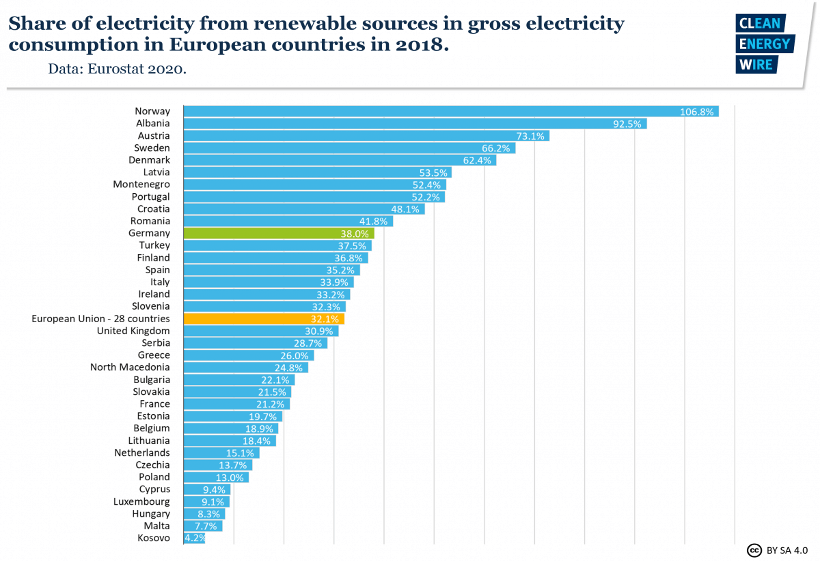 The European Union’s electricity consumption has seen a number of positive trends since 1990, especially with the use of coal and oil in decline and an increase in renewable energy usage. However, in order to achieve the targets outlined by the Paris agreement, it is clear that the energy sector must continue to undergo transformations.

According to Eurostat, in 2018 total net electricity generation in the EU was 2806 Terawatt hours (TWh), which signals a significant increase when compared to 1990 levels of 2582.47 TWh. Furthermore, electricity consumption in the EU was 3098.1 TWh in 2018 compared to 2464.6 TWh in 1990. 45.5% of the net electricity generation in the EU in 2018 came from combustible fuels, a quarter (25.8%) came from nuclear power stations, and the remaining electricity came from renewable energy sources such as hydropower, wind and solar (28.5%). While this indicates that there is a significant amount of room for growth since the majority of the EU’s energy supply still came from combustible fuels, these statistics are promising since the EU’s production of renewable energy increased from 16.6% to 28.5% in ten years.

In 2018, the EU share of renewables reached 35% in electricity. This reliance on renewables has largely been driven by the initial Renewable Energy Directive established in 2009, which required the EU to fulfill at least 20% of its total energy needs with renewable energy by 2020. The Directive also states all EU countries must ensure that at least 10% of their transport fuels came from renewable sources by 2020. Moreover, there was a recast Renewable Energy Directive released in 2018 that implemented a new binding renewable energy target of 32% for the EU in 2030, with a clause for possible upwards revision in 2023.

As a result of low natural gas prices, significant coal-to-gas switching took place in the power sector in the EU, which relied on nuclear energy for 25% of its generation in 2018. The EU has placed an emphasis on renewable and nuclear energy as a way to replace the use of coal to generate electricity. In 2018, coal accounted for 20% of the EU’s electricity mix. In order to achieve its goal of replacing coal with other energy sources, the EU has attempted to reform the EU Emissions Trading System (EU ETS) by implementing a market stability reserve, which allows for adaptations due to economic development. One of the prominent critiques of the EU ETS has been that its emissions targets are set too low. The market stability reserve aims to ensure that targets of individual countries are more ambitious and in-line with what is feasible for them given their level of economic development.

Other pertinent policies that impact electric power in the EU are the recent Directive on Common Rules for the Internal Market for Electricity and Regulation on the Internal Market for Electricity, which were put in place at the start of 2020. Through this Directive and Regulation, the EU has introduced a new limit for power plants eligible to receive subsidies as capacity mechanisms (subsidies to generation capacity emitting 550gr CO2/kWh or more will be phased out under the new rules) and has put the consumer at the center of the clean energy transition through enforcing a framework for consumer protection. It has allowed for electricity to move more freely to where it is most needed so that society can increasingly benefit from cross-border trade and competition. Through this, the EU hopes to foster investment that provides security of supply while also decarbonizing the energy system.

A bright spot for the EU is that it has a significantly lower emissions intensity of power generation than other large economies throughout the world. The EU had a carbon intensity of 270 grams of CO2 per kilowatt-hour (gCO2/kWh) in 2018 while China, Australia, and India had carbon intensity levels of 600gCO2/kWh, 700gCO2/kWh, and 700gCO2/kWh—respectively. Yet, as innovation and investment continue within the EU, it is imperative that policies pertaining to distribution and use of electricity are strengthened so that green electricity growth persists.

In order to continue decarbonizing the EU’s energy supply and ultimately transform the electricity sector, there must be an increase in green distribution network investments. Through investing in networks such as smart grids and smart meters, the EU will be able to ensure that the distribution of electricity continues to be efficient while also becoming greener. Moreover, while the EU has done a laudable job in decreasing its use of coal in electricity, more work can still be done to decrease coal and oil use. Continuous monitoring of EU ETS emissions targets and development of stable infrastructure allowing for green electricity production will play a powerful role in the growth of green electricity.

Since the EU wishes to put the consumer at the center of the energy transition, consumer education will also be a powerful tool in ensuring that consumers recognize the importance of choosing green energy sources whenever possible. The development of programs in school that teach children about climate change, as well as proper labelling and advertisement in consumer markets, can go a long way in promoting the use of sustainable electricity. Furthermore, as the graph at the beginning of the article depicts, certain countries in the EU have utilized renewable energy sources much more effectively than others. Hence, the creation of programs that encourage development of green energy in countries with a lower utilization of renewable energy could also be beneficial.

This post was submitted by EU Country Manager Brittany Demogenes.