The United States is home to some of the most groundbreaking research on climate change, but at the federal level, research and development relating to climate change mitigation are not prioritized for funding, and it remains a contentious political issue divided along party lines. Republicans in Congress often support funding for innovation programs – that is, funding research and development for technological solutions to the climate crisis. However, this support is often soft and couched amid denialism that climate change is real and human-caused.

A report from the U.S. Government Accountability Office (GAO) in 2018 found that federal climate change funding was U.S. $13.2 billion across 19 agencies in 2017. This marks an increase of $4.4 billion from 2010. However, the GAO noted in the report that much of this funding went to climate-related programs like nuclear energy without being directly earmarked for climate change mitigation. 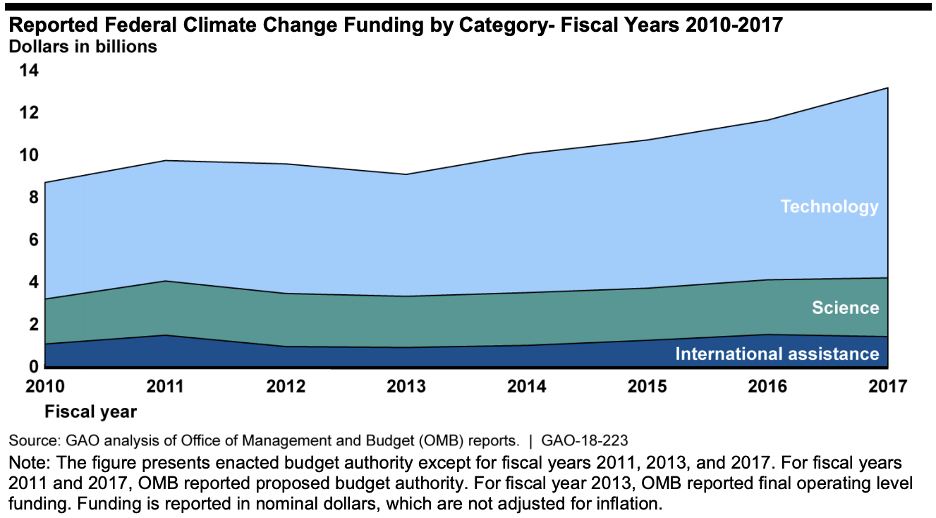 As shown in the graph above, the largest portion of federal climate change funding through 2017 went to technology research, development, and deployment. Federal climate change research is administered through 13 federal agencies in the U.S., including the Departments of Agriculture, Commerce, Defense, Health & Human Services, Interior, State, Transportation, and Energy, the National Aeronautics and Space Administration (NASA), and the National Science Foundation (NSF), the Smithsonian Institution, the Environmental Protection Agency, and the U.S. Agency for International Development (USAID). These agencies’ research is coordinated through the U.S. Global Change Research Program (USGCRP), a federally-mandated program funded by Congress.

The USGCRP covers both mitigation and adaptation, including research into the current and projected effects of climate change on the U.S. as well as technological, scientific, and policy solutions.

In June 2020, the U.S. House of Representatives Select Committee on the Climate Crisis majority staff released a 547-page report, “Solving the Climate Crisis: The Congressional Action Plan for a Clean Energy Economy and a Healthy, Resilient, and Just America,” which outlined policy solutions to spur economic development through clean energy jobs, protecting public health, promote environmental justice, and guiding the transition of the American economy to net-zero greenhouse gas emissions by 2050. The report drew from research done by both NGOs in the climate space across the U.S. and government-funded research through the agencies of the USGCRP. Although the report was compiled and published by majority staff (in the Democratic Party) in the Select Committee on the Climate Crisis, and therefore will not inform bipartisan federal policy, the release of the report and climate action plan contained within reflect a growing push toward decisive action to mitigate climate change through research-based policy.

While at the federal level many efforts are being made to curb the government’s effectiveness on climate change, the U.S. remains a major funder of climate change mitigation research, and through coordinated work between agencies, research into technology, science, and policy solutions continues to move forward.

Message: Address your Take Action Message to the Director (s) of the research organizations that you profiled either complimenting them on their work and/or pointing out issues that you think they should address.

Climate change represents an existential threat to the health and prosperity of all Americans and global citizens. Now, more than ever, we need to focus on technology, scientific, and policy solutions to rapidly reduce our emissions and slow the damaging effects of climate change.

Send a message to the Executive Director of the USGCRP supporting climate change mitigation research.