Germany is often seen as the engine of Europe in the context of industry, its rising economy, and international exports. But Germany has not been unaffected by the Coronavirus Pandemic. The Kiel Institute for World Economy remarked that the first two quarters of 2020 show the smallest amount of industrial production in decades. It is expected that the economy will contract to an extent that has not happened since the second World War. According to economist Dr. Gitzel from the VP Bank Group, German GDP will decrease by 10% over the next decade. The image below shows the fraction of affected labor across Germany. Clearly, the south, where most of the ‘heavy’ industry is located, is more affected than the north. It is also an area where the number of infected persons has been much higher. 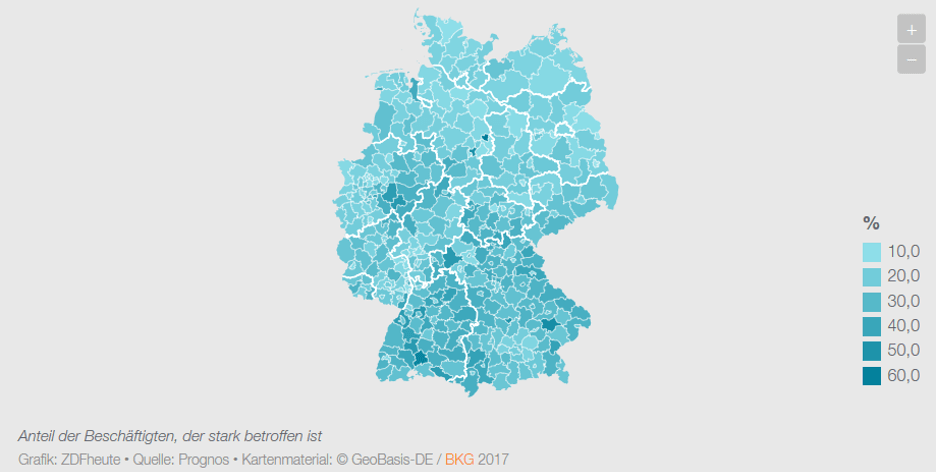 The German car industry, famous for its quality and high-level production, is predicting a decrease in production of 7 million vehicles in comparison to last year. There are approximately 830,000 workers in the car industry and all have experienced the impact of the pandemic. Employees have been asked to take their remaining holiday days and if that is not enough, ‘Kurzarbeit’ (short-time work) is being requested.

In 2019, the revenue for the German car industry was 436.2 billion euros. This year only 3.8 million vehicles are expected to be built and sold in Germany, about 1 million less than the year before. The European car market as a whole has also shown high losses. In Spain and France, for instance, the number of new registered cars has decreased by 69% and 71% respectively, and by 85% in Italy. Germany reported a decrease of 38% new registered cars in March compared to 2019.

The German car industry is also facing the need to transform itself in order to meet national standards for CO­2 emissions. This affects major manufacturers such as BMW, Mercedes, VW and others. As the manager of “Autogroup” by AlixPartners has noted, the initially planned investments of 234 billion euros for electric mobility through 2024 are no longer valid. Most likely, these will be reduced to a fraction of this amount in order to remain profitable. Regardless, he says, the Coronavirus Pandemic is a chance to question and re-structure the total industry. The goal is to have 20% of all new-registered cars be electric vehicles, which can only be achieved if the car industry “plays the game”. Rather than having a large majority of vehicle types available, the industry should be more focused on the fabrication of its electric vehicles.

Given that a majority of manufacturing parts for German cars are imported from China and elsewhere, the carbon footprint of the German automobile industry is large. However, no specific numbers are reported or known. Import shortages from China at the beginning of the year resulted in manufacturers looking for alternative suppliers and alternative logistic paths (from ships to air-traffic) to reduce time of delivery.

The German car industry should start to rethink and question their current setup. Rather than importing and exporting again to China, the United States, and other distant countries, the production and the supply chain should be focused on Germany or Europe. The Coronavirus Pandemic has shown that supply chains are easily interrupted, which immediately affects production. Furthermore, by strengthening the manufacturing of electric vehicles, hydrogen engines, or cars that run on natural gas, the car industry would be sending an important signal that it has the wherewithal to support the efforts of the German economy to move towards the use of more renewables and alternative energy sources.

With the released Coronavirus ‘support’ packet, the government had a unique chance to make regulations and rules for the transition to a low carbon economy. Largely, however, they failed to do so. The highlight of the support packet is the reduction of the sales tax from 19% – 16% to make consumption more attractive for the second half of 2020. This shows that the German government remains focused on growing a consumer economy. Other parts of the packet include further subsidies for purchasing electric vehicles and small one-off payments to parents with children. Also planned are a €5 billion allocation to the German Deutsche Bahn (German Train) and another €2.5 billion to public transport. But what about the remaining €122.5 billion? € 9.0 billion are given to the German Lufthansa Group in order to save the group from bankruptcy. With support, the German government will purchase parts of the group’s shares. Finally, the ‘support’ packet mentions investment into renewable energy alternatives, which goes hand in hand with the newly adopted hydrogen strategy.

The German Government has shown what good leadership can be in times like this. It has shown that decisions can be made in the short term that reflect how the government cares for its citizens. However, there are also shortages in the COVID-19 ‘support’ packet, which was released in the beginning of June. For instance, why wasn’t more money allocated to the expansion of public transport? The reduction of the sales tax is not ideal as it may lead to a rebound effect in terms of consumption.

The government had a unique chance to think about more sustainable pathways for Germany’s economy. Support for industries should have been bound to specific green-focused criteria in order for an industry to receive aid. To subsidize the purchase of electric vehicles even further, the government should invest in the expansion of national infrastructure. Electric vehicles are only renewable if the electricity that runs them comes from renewable sources. By simply expanding the ‘fleet’ of electric vehicles on Germany’s roads, the country will not meet its carbon emission targets. Finally, we ask why other alternatives such as Carbon Capture and Storage/Usage (CCS and CCU) are not being mentioned in the ‘future and research packet’. In order to achieve the pledges made to the Paris Agreement; these options should at least be investigated and included in a transition to a low carbon economy.

Federal Minister of Education and Research

Links to Articles on Corona and the affected industries.