Wildlife loss, the growth of monocultures, mechanized agricultural, and livestock “factory farming” is increasing the risk of pathogen spillover, disrupting life-sustaining ecosystem services, and contributing to GHG emissions. This post is an assessment of land cover change in the top greenhouse gas emitting countries, with an eye on how natural, wild areas support species diversity and at the same time prevent GHG emissions.

In 2012, the WWF Living Planet Index reported a global retreat of biodiversity with 30% on average and up to 60% in the tropics. Similar trends have been observed in Europe and in Germany. Despite the endorsement of the national strategy in biodiversity, the Federal Office for Nature Conservation (Bundesamt für Naturschutz – BNS) reported that more than 70% of the recognized biotope regions were threatened and 2% had already been lost (2014). Together with 194 other countries, Germany agreed to the Aichi Targets in 2010 under the convention for biodiversity, which targets 17% of all terrestrial areas to have a protected status, in addition to 10% of all marine areas. According to the global world database of protected areas, in 2020, 38% of the terrestrial coverage and 45% of the marine areas has some form of protected status. However, the total coverage does not present an even distribution across the above-mentioned biotope regions.

As shown in the map below, in 2015, the land cover of Germany was dominated by almost 90% of forest and cropland used for agriculture. Of Germany’s total annual greenhouse gas emissions, agriculture makes up 8% (62 out of 805 million tons CO2 equivalent). Living up to the federal law of forest, the coverage of forest has been growing by 1 million ha in the last 50 years. However, the forest cover does not correspond to ‘natural habitat’ as up to 11.4 ha are used within the forestry sector. Here, the principle “protection through usage” integrates the idea of nature conservation and timber supply. The last forest inventory showed that the majority of forest is concentrated in the mountainous terrain, meaning that there is no even distribution and limited habitat possibilities for plant and animal life. 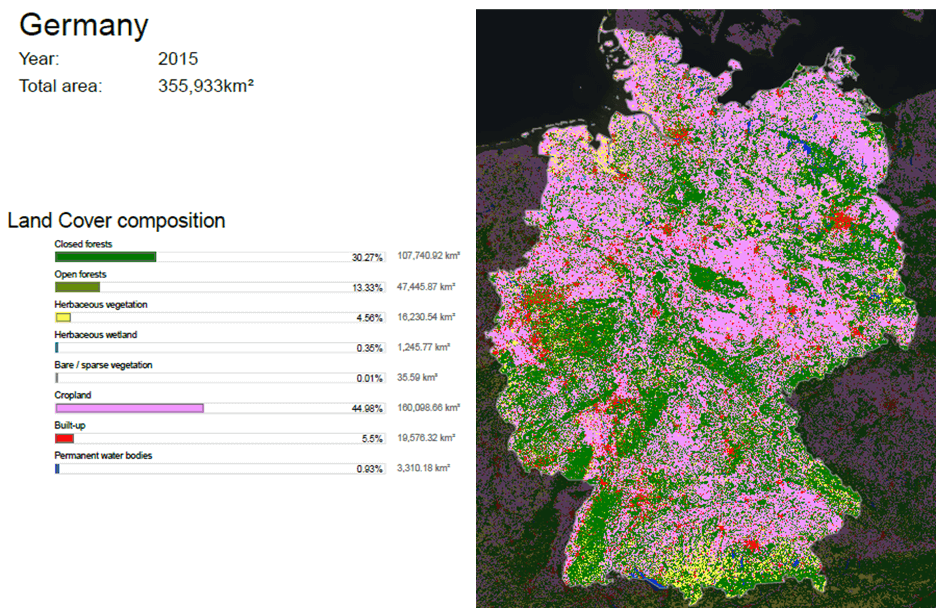 This also highlights that just because an area has a protected status, does not mean it provides habitat opportunities. The status report on the successful implementation of the national strategy of biodiversity in 2017 by the BNS suggests a continuing decline in almost all monitoring indicators in regard to the protection of biodiversity. No ‘wild areas’ exist any longer, which might also be due to not having a concrete definition of wild area in Germany.

Out of the officially recognized monitoring indicators for assessing the status of biodiversity, the majority shows either an ongoing stable trend or a decline compared to the baseline year (1975). In total, 19 indicators subdivided into 5 sectors cover a big fraction of existing biotopes and ecologically unique areas within Germany. None of the indicators have reached their national goal, although the total coverage of protected as previously managed is getting very close to reaching its target.

With the national strategy of biodiversity, which goes hand in hand with the Aichi Targets under the convention for biodiversity and its detailed monitoring programmes, it became clear that it is not the missing framework or strategies that prevents Germany from securing its biodiversity. The concentration of monocultures, regardless of being forest, grass or cropland, limits the adaptive capabilities of existing biodiversity and leads to clusters of specific biodiversity based on similar habitat. It allows highly adaptive species to become more abundant, while more vulnerable species are pushed to extremes. In the end, it is the missing will and awareness of the German government and public to emphasize the necessity of protecting natural habitat and maintaining biodiversity. In most recent years, multi-criteria analysis was necessary to make decisions based on what area was available and analysed from different perspectives. Actively working towards the achievement of the above defined goals requires compromise between agricultural, recreational, and urban land rather than just having a strategy and multiple monitoring programmes. The success or failure of the “targets” is hence dependent on a strong lead and enforcement of the government’s side as well as an awareness within the public that puts higher value and reconnects with the nature around it.

The government is encouraged to include the topic of biodiversity into its mainstream policies. It is proven that without existing ecosystems and biodiversity the human race would never have developed. Nature and the ecosystem allow us to live the way we live. This does not occur without a price and, as you know, biodiversity all over Europe, and globally, has declined rapidly over the last decades. We need to have annual monitoring reports, to observe short- and long-term trends. Proper data and databases need to become available to the public so that reports can easily be generated. The intensifying protection of biodiversity is necessary and should be enforced to at least reach national biodiversity targets. We demand raising more public awareness, more time allocated for natural monitoring in school, sustainable land use products, and non-manipulated species to ensure that biodiversity thrives.

Director of the Federal Office of Nature Conservation

Link to WWF’s Summary on the political barometer to biodiversity (2014):

Link to the website of the forestry sector in Germany:

Link to latest status report on trend of the national monitoring indicators:

One in Four Species in France is Endangered, Despite Biodiversity Protection EffortsLand Being Lost to Urbanization: A Threat to Biodiversity in Italy