Since the establishment of South Korea’s new climate system in 2015, the direction of the government’s energy policy has been to achieve the twin goals of “Nuclear Phase-out” and “Fossil Fuel Phase-out.” The country seeks to foster eco-friendly future energy to promote de-fossilization. Also, achieving nuclear phase-out in a way that stops the extension of the life span of old nuclear power plants and avoids the construction of new nuclear power plants. In other words, South Korea plans to reduce the proportion of nuclear power and coal power generation and expand LNG and renewable energy.

In June 2019, the South Korean government finally finalized the 3rd Basic Energy Plan, composed of “Five Key Promotion Tasks” under the vision of “Sustainable Growth through Energy Conversion and Enhancement of Quality of Life”:

The 3rd plan puts “Energy Conversion” to the fore. Unlike the second plan, which announced that it would build more nuclear power plants, the third plan specified reductions in coal power plants and nuclear power plants, and significantly increased the share of renewable energy generation by a factor of 4. It is also noteworthy that hydrogen is specified as the main energy source.

As hydrogen is a major energy source, South Korea selected the hydrogen economy as one of the three strategic investment areas of the government’s innovative growth. In 2019, as a leader in the global hydrogen economy market, South Korea achieved the world’s No. 1 sales of hydrogen vehicles and the largest number of charging stations.

The table below compares the 3rd Energy Basic Plan revised in 2019 with the 2nd. 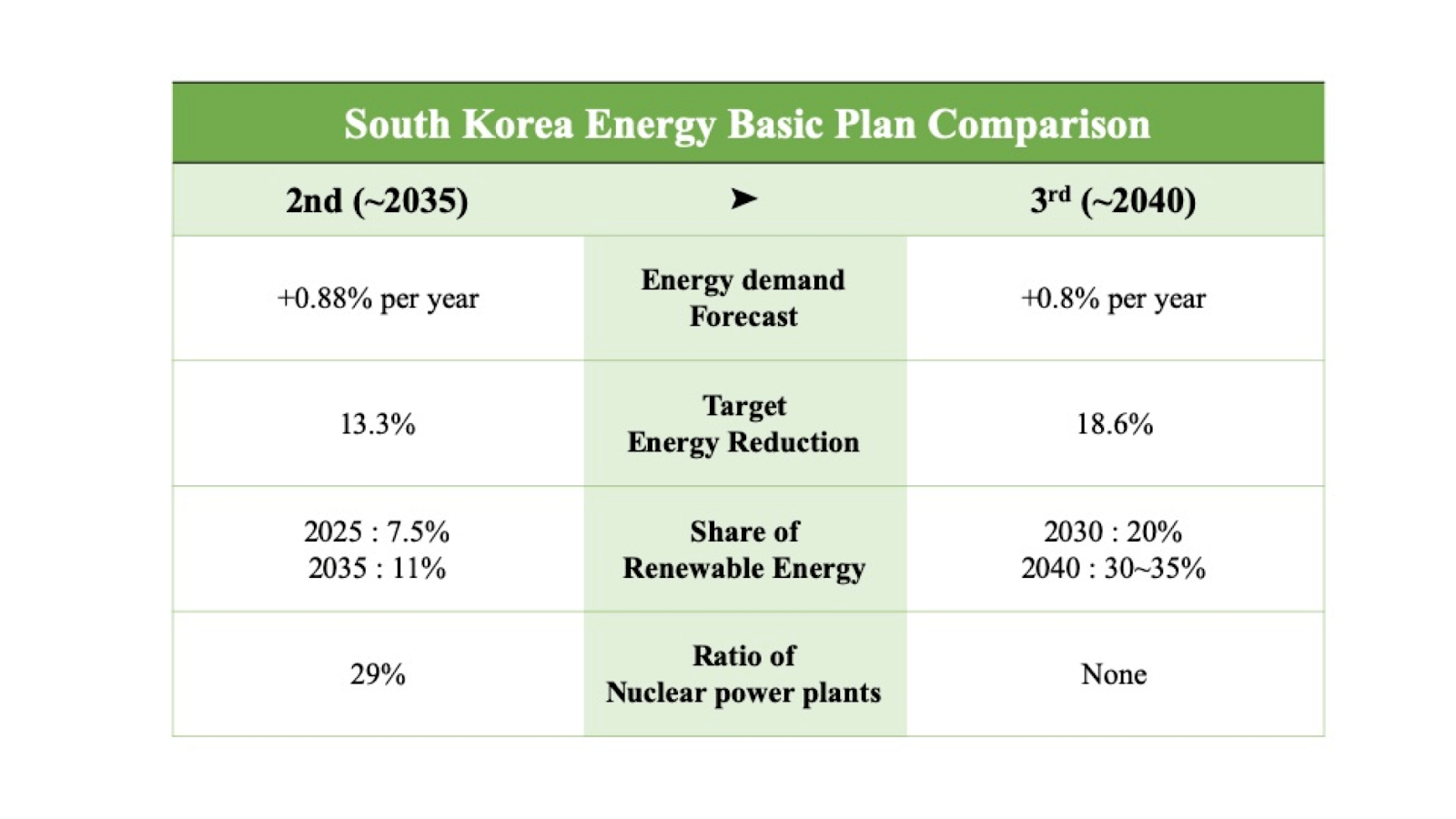 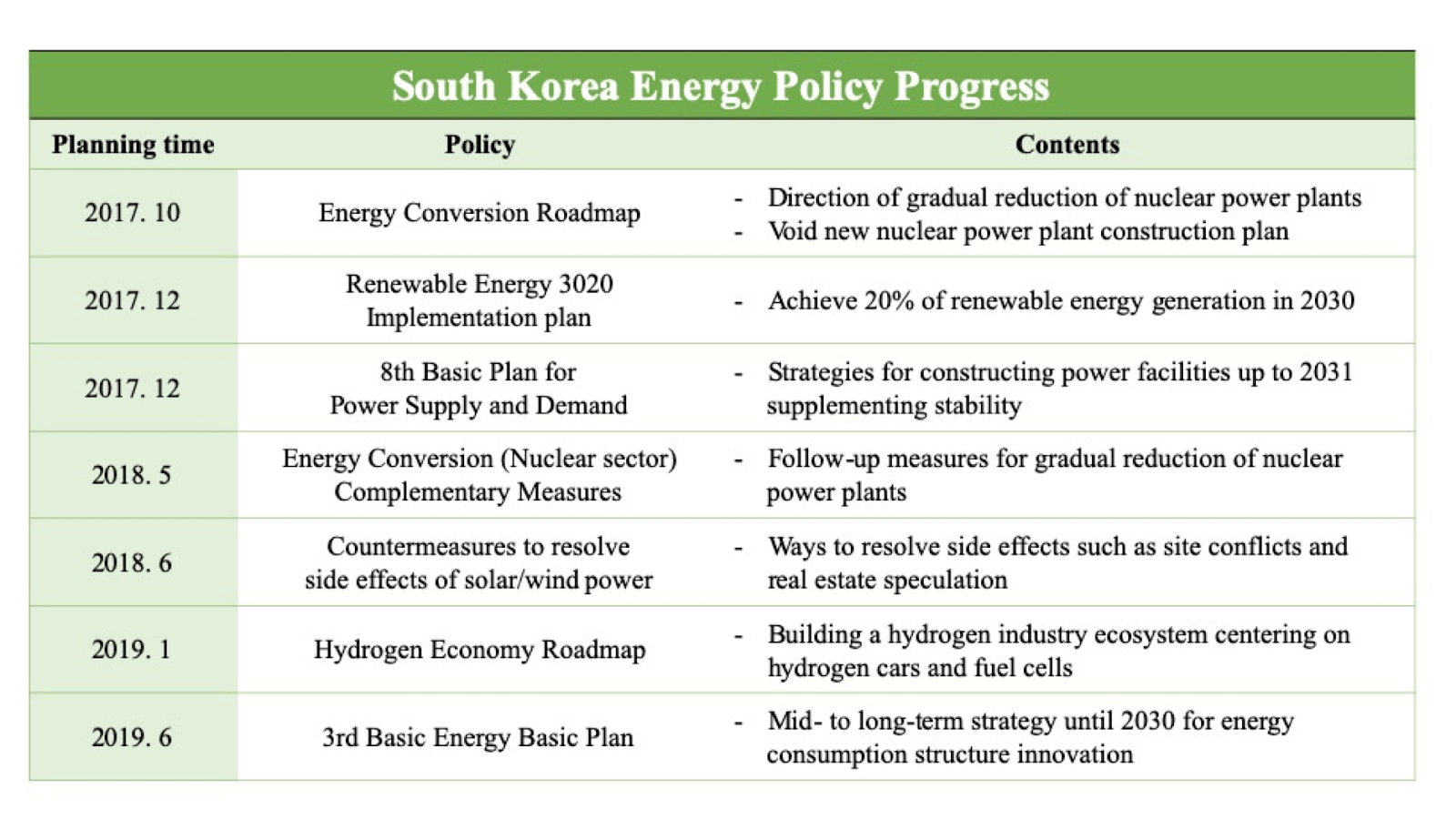 As a major energy importer, South Korea imports nearly all of its oil needs. Electricity generation mainly comes from nuclear power and conventional thermal power which accounts for more than two-thirds of production. South Korea is also the second-largest importer of liquefied natural gas in the world.

In 2019, the energy consumption of South Korea was set to drop for the first time since 2009. Following the report from Korea Energy Economics Institute, the country’s overall energy consumption came to 137.6 million TOEs, (tons of oil equivalent) down 0.93% from the same period of 2018 in the first seven months of the year. However, the report did not provide any reasons for the drop.

Below is South Korea’s Energy Production status chart of the recent 5 years.

Please refer to this infographic by Reuters.

We are grateful for the achievements that South Korea made by installing 3.47GW renewable energy facilities, which is 1.5 times the target of last year’s supply, and reduces fine dust emissions from coal power generation by 37% compared to the same period last December.

We hope that the 9th Basic Plan for Power Supply and Demand this year will contribute to the safety and efficiency of our energy system by utilizing various eco-friendly energy sources such as hydrogen, and solar heat. In addition, we expect that efforts will be made to provide consumers and industries with incentives that reduce their energy consumption.

NOTE: NATURAL GAS IS NOT THAT ECO-FRIENDLY