Unlike other countries, Germany has been trying to phase out nuclear power (by 2022) since the Fukushima incident in Japan and is now intending to phase out coal by 2038, at the latest. As reported in previous Climate Scorecard posts, the phasing out of nuclear power led to a sudden increase in coal consumption; but this is now declining as it is being more and more replaced by renewables and gas.

For the first time in 2019, a majority of electric power came from renewable energy sources, such as wind and solar. The price for renewable energy is now as competitive as fossil fuels (coal and lignite). Germany’s new Climate Protection Law calls for an additional restructuring of the power sector,  prioritizing the expansion of electric vehicle production, the extension of the national transition power grid, and support for the wind sector, which has had major economic losses over the last few years, due to bureaucratic burdens and ongoing policy changes and debates.

Germany is not only focusing on energy transition but also on maximizing energy efficiency. In 2014, the German government released the German National Action Plan on Energy Efficiency (NAPE) (“Nationaler Aktionsplan Energie Effizienz). The plan addresses consumption by private households, industrial companies and municipalities. The plan has three focus areas. The first is to provide individual consumers and businesses with reliable and clear information and advice on energy efficiency. Secondly, the plan provides funding and research in energy efficient construction to encourage businesses. Thirdly, the plan calls for large companies to undertake energy audits.

Other small but related measures were taken, for instance, the introduction of an easily comprehensive energy label for appliances, cars and particular heating systems. Finally, the Government launched a platform on energy efficiency where industries from multiple sectors can share findings and lessons learned.

In authorizing NAPE in 2019 the federal government put forward the goal of reducing primary energy consumption by 30% in 2050, which is equivalent to 1200 TWh.  The figure below shows the current trend in primary energy use. (From bottom to top: Coal, lignite, oil, gas, nuclear, other, renewables.) As one can see, large measures need to be put into action, if the government’s target is to be met. 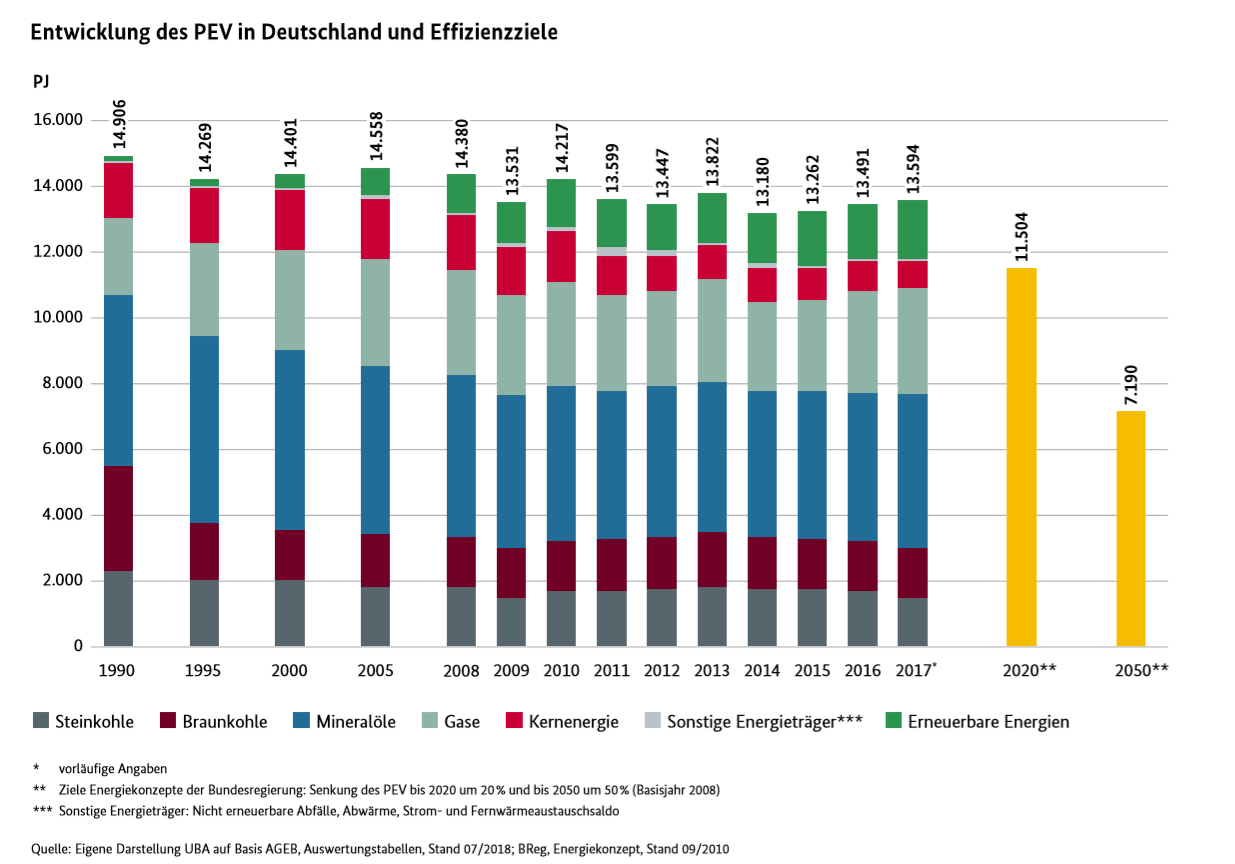 The German government has heard the wake-up call from the global protests to act. The agreed climate protection law and the updated energy efficiency strategy are signals to industry and our civil society that the government is stepping up its efforts. However, the question remains how the practical implementation of new government policies will work as they require new investments and restructuring of businesses and behavior change by individuals.

The Ministry of Economy and Energy is encouraged to take whatever steps are needed to implement the new Climate Protection Law and the National Action Plan on Energy Efficiency.  In order to be successful, it needs to improve communication with citizens and the general public regarding the steps it is taking to implement these policies and how people can participate in the process.