In order to comply with the Paris Agreement, the U.S. Environmental Protection Agency under President Obama passed the Clean Power Plan, a standard that used the Clean Air Act to require carbon emissions from the power sector to fall 32% by 2030, relative to 2005 levels. The plan did not regulate individual power plants directly, but rather set national standards and allowed states to create regulatory paths to meet them in the most cost-effective ways possible.

The plan was immediately challenged in the courts by 17 states, who claimed that the EPA did not have the power to regulate carbon pollution. When President Trump took office in 2017, he immediately began the process of dismantling the plan and replacing it with the Affordable Clean Energy (ACE) Rule – which, it should be noted, fails to include reforms to make energy either affordable or clean. The rule is intended to increase the efficiency of coal-fired power plants and is projected to allow emissions to increase as much as 28% per plant by 2030.

In addition to the broad push for the ACE rule, the Trump administration has consistently worked to undermine any progress in policies encouraging the transition from high-emitting fossil fuels like coal and oil to renewable energy generation sources, through consistent rollbacks of key EPA regulations, from the Mercury and Air Toxics Standards to the New Source Performance Standards.

Despite the Trump administration’s best efforts to “bring back coal” as was promised in President Trump’s 2016 campaign, since 2015 the portion of the energy sector that is powered by coal has steadily declined due to the decreasing prices of renewables and natural gas, while average electricity prices have largely remained constant since 2015.

However, the reforms have not facilitated the emissions reductions President Obama sought to produce with the Clean Power Plan, and U.S. emissions have fallen only slightly since President Trump took office. In 2019, U.S. greenhouse gas emissions fell 2.1 percent due to the drop in coal energy consumption, though the bulk of these reductions were offset by increased consumption of natural gas. This is nowhere near sufficient to meet the U.S.’ Nationally Determined Contribution of a 26-28% reduction below 2005 levels by 2025.

Nuclear energy accounts for approximately 9% of national energy production, a level that has remained largely consistent over the years but which may fall as older nuclear power plants are retired and not replaced. This has prompted some concern that the lost generation will be replaced by older coal-fired power plants, thus greatly increasing emissions. 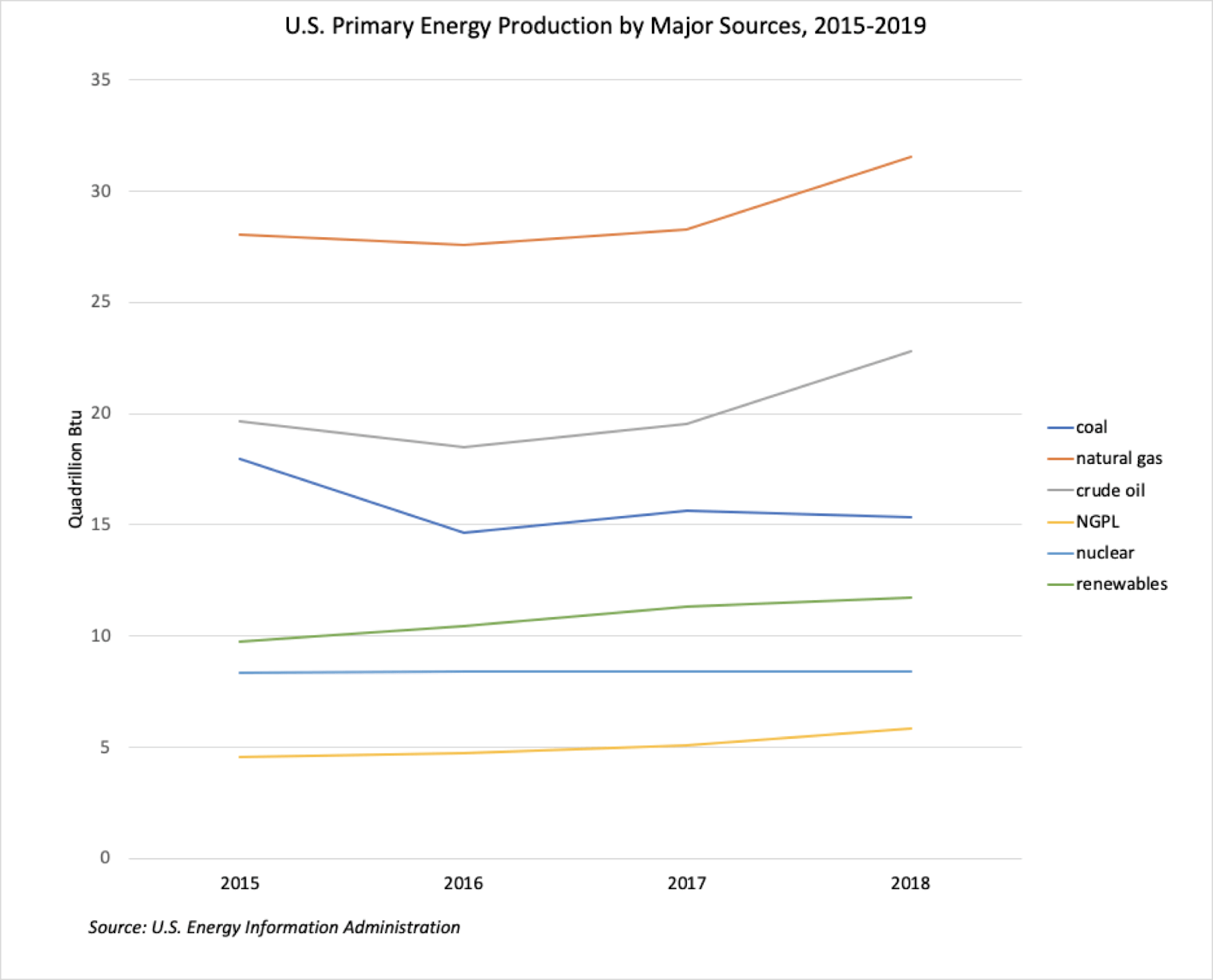 While in many states, clean energy standards are working to encourage the shift from fossil fuel energy generation to renewable energy, lack of federal leadership greatly inhibits the ability of the U.S. to reduce its greenhouse gas emissions from the energy sector to meet its commitments to the Paris Agreement.

Send a message to EPA Administrator, Andrew Wheeler, calling for strong regulations to reduce emissions from the energy sector at the federal level.

Strong federal support for the expansion of low-emitting energy generation is necessary to lead the nation to a future of clean, affordable, renewable energy. The Trump administration’s continued hostility toward renewable energy and arbitrary support of the coal industry flies in the face of the President’s claims that he represents the best interests of the environment and the health of the American people. The U.S. Environmental Protection Agency should cease all proposed rollbacks of regulations to limit emissions and should incentivize the transition to renewable energy generation.