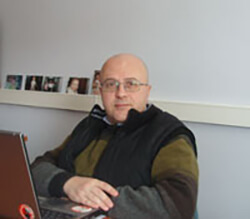 Prof. Dr. Levent Kurnaz is the Director of the Center for Climate Change and Policy Studies (IklimBU) at Bogazici University. He is the author of numerous books and articles on climate change including the recently published book in Turkish, Before the Last Glacier Melts.

His knowledge of both statistical methods, thermodynamics, and fluid dynamics methods led Dr. Kurnaz to the field of climate modeling. His research team recognized that although Turkey is at the crossroads of many regions, there was not a regional CORDEX model – a regional climate evaluation system. The team decided to take responsibility for the Central Asian Region under CORDEX project. The team’s work was included in the IPCC Fifth Assessment Report as the first regional climate modeling study covering the entire Central Asia region.

In 2014, Boğaziçi University’s Climate Change Policy Application and Research Center (IklimBU) was officially established under the direction of Dr. Kurnaz. The Center continues its activities as an interdisciplinary research center researching the impact of climate change on Turkey and the Central Asian region.

Being the Director of IklimBU, Dr. Kurnaz has played an active role to provide insight into the impacts and risks of climate change on the geography of Turkey and on neighboring countries located in the Eastern Mediterranean, Middle East, and Central Asia. He has advised policy makers in areas such as renewable energy, emission reductions, adaptation in agriculture, and the impact of extreme climate events.

Besides his groundbreaking scientific research in Climate Change, Dr. Kurnaz reaches a wider audience through his publications, books, TV programmes, and trainings. He also has prepared a series of informative videos on climate change for elementary and high school students.