During a few weeks from last August until mid-September, Brazil was constantly on the main global newspapers’ headlines. It was not because of our long lasting political turmoil, sluggish economic recovery or a (highly expected) World Cup Championship. It was due to what became acquainted as the “Day of Fire”: on the second weekend of August, farmers settled fire into large native Amazon areas, motivated by reiterated attacks from President Bolsonaro on the country’s environmental laws and main controlling organisms.

Accordingly to local papers, this was the way that these farmers (mainly cattle ranchers) have met to show the President that they “want to work” and, therefore, they should deforest and set fire, razing the area.

This movement received special attention when on Monday, August 19th, around 3pm in São Paulo, the country’s main financial center, the day literally turned into night as a result of the encounter between the ashes coming from Amazon and heavy humid clouds. This is just a small piece of a tragic scene: NASA, the American space agency said that 2019 has been the year with the highest fire activity in the Amazon since 2010. Below is a tweet from NASA on August 23rd showing large and intense fires burning: 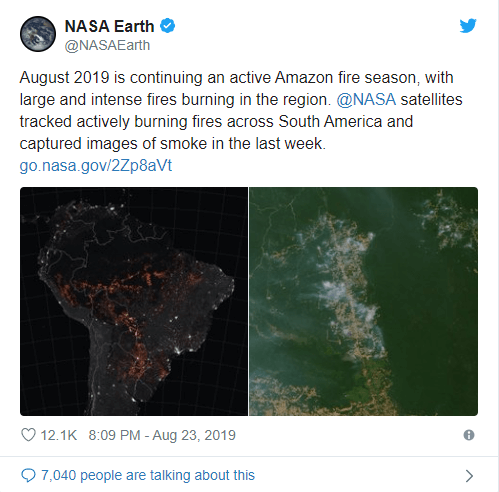 According to NASA scientists, fires in the Amazon are quite volatile, strongly varying throughout the year and from year to year. They are  heavily influenced by climate and economic changes. Although 2019 is appearing to be a dry year having a relevant role on the number of registered fires, both the moment and the location of these fires are more related to deforestation and land use than to regional drought (graph from NASA):

Data from INPE, the Brazilian Institute for Space Research, are aligned with NASA’s. According to the Institute, the number of fires in the Amazon had an 82% increase from 2018 – 2019:

This information was heavily criticized by the current government, and such criticism may have influenced the dismissal of INPE’s president.

President Bolsonaro and his team were heavily criticized by world leaders, such as Macron and Merkel, on how he dealt with the situation; first, corroborating the actions taken by those cattle ranchers and second, denying data from one of the most respected research institutes in Brazil.

We can’t expect much from this current government on environmental and climate change issues. However it may be susceptible to pressure from wealthier nations, as illustrated by the Nordic pension funds that are threatening to cut investments in Brazil if action is not taken to control the Amazon fires. The Amazon is a global resource vital for the wellbeing of our planet, and other countries are not going to sit by and do nothing while the Amazon burns.

Brazil is falling behind not because of the events themselves, but because of how the country’s leader denied the cause and effects, and neglected his role to solve it.

Brazil has just passed through a serious climate-related crisis, showing how fragile our institutions are in this regard. What we saw was not only a massive fire season, corroborated by statistics from both US and Brazil research institutes, but, especially, a denial of facts instead of an answer to the population and to other leaders. Climate change is real and we, as holders of the largest biodiverse region in the world, should take it more seriously instead of denying it or, worse, condoning with it.