Spotlight Activity: The Government Is Failing To Take Action To Meet The Renewable Energy Targets It Has Set

In July 2018, the distribution was more uneven with a dominance of non-renewables (particularly brown coal) with a share of 62.2% of the total energy production. This highlights the improvement of the net energy sector.

Considering the statistics for the first half of 2019, we find that in total wind was the most dominant energy source (ca. 67 TWh) followed by brown coal (53.0 TWh) and black coal (26.4 TWh). For the first time, however, renewable energy sources provided more energy (92.2 TWh) than non-renewables (79.4 TWh) during the first 6 months of the year. These numbers were all published by the Frauenhofer Institute. 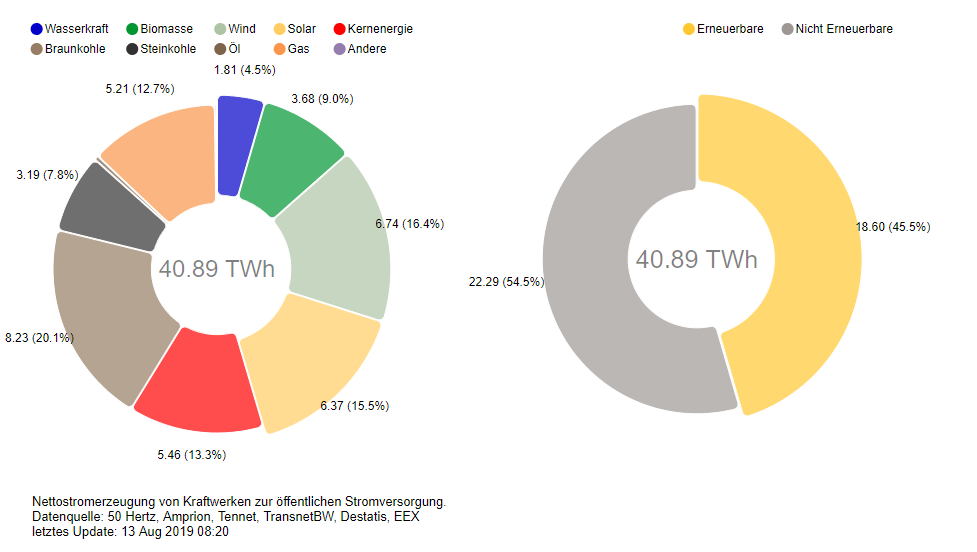 Germany has put a lot of focus on the renewable energy sector with the “Energiewende” and the EEG from 2000. The main goal of the “Energiewende” is to achieve up to at least 80% of the total energy consumption being supplied by renewable energy sources by 2050. Meanwhile, the country wants to phase out coal by latest 2038 and nuclear energy by 2022.

A study released in 2018, provides a comparison between costs per kWh for the different energy sources. Figure 1 shows the costs associated with each energy source with photovoltaic sources on the left side (yellow), wind sources in the middle (blue) and fossil fuels (grey = black coal, brown = brown coal, red = gas and steam). From Figure 2, it becomes clear that particularly onland shore and free-standing PV fields are the most profitable and practical source of energy generation for use in the free standing solar energy parks.In the last decades, the costs of PV’s have dropped rapidly, while fossil fuels have seen the opposite trend. 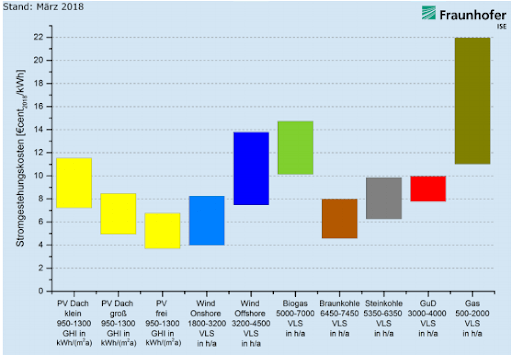 As it can be seen from Figure 1, the main sources of renewables in Germany are wind, biomass and solar with solar being highly dependent on the sunny periods, which are currently still unreliable. For instance, in June 2019, during one of the hottest periods of the year, 33.4 TWh was generated in one day making up 52.4% of the whole energy required. On the other hand, in December 2018, only 0.58 TWh were generated through photovoltaic cells. However, wind has shown to be a very efficient and reliable source of energy providing energy all year around providing up to 16 TWh during the winter. At this stage, most turbines are located onshore but a high capacity yet remains through the current construction of offshore wind farms. In the last few years there has been a continuous decline in further developing and expanding the wind sector due to multiple reasons.

The main reason for the reduced expansion of wind resources is that since 2017, the investment in the wind sector has decreased due to less subsidies and higher competition being available for this sector, making it difficult to expand. Also, due to the current bureaucracy within Germany, international investors don’t want to rely on or play with the idea of going through customs and rules, and rather decide to invest more overseas.

The German government has recognized the importance of extending the renewable energy sector, but actions are too slow and not precise enough to achieve the initially set goals. The Erneuerbare Energien Gesetz (EEG) was a unique and innovative reform that should continue to subsidize our renewable energy sector. However, lately the EEG has become a larger burden than it is useful. It is a bureaucratic obstacle pushing investors overseas. At the same time, renewables have yet to find their way into the public transport system, which is still largely dominated by combustion engines and other vehicles. All mining of coal and the extraction of oil should slow down and stop as soon as possible. Germany should not stop its efforts to become 100% renewable.

Mr. Podewils, the Agora Energiewende is encouraged to speak up and become a central body in giving advice in the transition of renewables in Germany. It is important that every necessary stakeholder and citizen knows about the fact that the elimination of coal is not going to cost more than anticipated and the consumer and general taxpayer does not have to count on extra costs. If it becomes more public that the energy transition will not hinder the general public, more support will be given by us citizens. It is your responsibility as one of the best think tanks in Germany to take action and speak up.