According to the 2030 climate and energy policy framework, putting forward a legally binding European Union (EU) targets, the EU needs to pledge to a 40% reduction in domestic emissions by 2030 in comparison to 1990 (Council of the European Union 2014) to comply with the 1.5 degree Celsius target of the Paris Agreement by November 2030. Also, the EU must pledge to increase the share of renewables in total energy demand to 32% as well as increase the energy efficiency of 32.5%. Climate Scorecard suggests that the following 3 strategies to guide the EU in strengthening its Paris Agreement pledge and make it 1.5 degrees compliant.

To reduce emissions in the building sector the EU has adopted in 2018 the Energy Performance of Buildings Directive which requires that in 2050 all existing buildings are Nearly Zero Emissions Buildings. However, the suggested renovation rate of 3% is not sufficient to reach this goal and is below the level that is considered to be compatible with the Paris Agreement.

Compatibility with the Paris Agreement requires going significantly beyond these parameters: it means increasing renovation rates to 5% annually, all new and renovated buildings being carbon neutral, and full electrification/phase-out of fossil fuels for water and space heating. At the same time the Eco-design Directive and the Energy Labelling Regulation make it possible for the Commission to accelerate improvements in the energy efficiency of domestic appliances.

The EU has recently adopted policies including a binding target of 32% for the share of renewable energy in total energy demand that would make the EU reach a share of renewable energy in electricity generation of 55% by 2030. According to scenarios developed by European research institutions, in order to meet Paris Agreement targets in GHG emissions reduction, it is recommended for the EU to take further steps in its engagements. Indeed, for decarbonizing the electricity supply sector, the EU needs to deploy renewable energy faster than Denmark which had the highest growth rate of renewables between 2009 and 2015.

By applying Denmark’s rate to the whole EU would lead to an increase of 49-59% in 2030 and 63–98% in 2050 of renewables, leading to emissions reductions of between 77–99% below 1990. The relevant EU institutions are the Directorate-General CLIMA (a department of the European Commission responsible for developing and carrying out Commission’s policies on climate action), ENVI Committee (which is drafting and adopting resolutions relevant to climate change policy which are later discussed; amended and voted upon by the European Parliament), and the Council of the European Union which adopts general goals in terms of emissions reduction and decides about the overall direction of European energy and climate policy.

Regarding the financing of climate actions, several funds and mechanisms have been put in place within the EU to encourage investments in low carbon energy projects, improvement of energy efficiency and electrification of other sectors.

Finally, in order to be compatible with the Paris Agreement, the climate action tracker estimates that the EU’s road and rail transport sector should be almost fully electrified using low carbon electricity by 2040. The last new internal combustion car should be sold before 2035. Such a rapid pace for removing carbon from this sector will require faster action from the European institutions like decreasing costs of electric vehicles along with the declaration of some member states to ban the sale of combustion cars.

To date, the discussed target of reducing average emissions from new passenger and small utility vehicles by at least 35% between 2021 and 2030, complemented with a quota for sales of electric vehicles of 35%, is a step in the right direction, with more stringent targets needed to support a faster transition to zero emissions transport.

To stay below the Paris Agreement’s 1.5°C limit, the IPCC Special Report on 1.5℃ finds that a very substantial increase in effort is required to peak global GHG emissions as soon as possible, reduce CO2 emissions to net-zero around 2050 and total GHG emissions shortly thereafter

We recommend that your Ministry update the greenhouse gas emissions pledge of the European Union to the Paris Agreement before November 2030. Your updated pledge should be aimed at reaching a target of 758 MTCO2.

We recommend that you implement the following policies in order to reach this target:

The reductions in these three sectors alone are enough to reduce EU28 total greenhouse gas emissions by up to 52% below 1990 levels in 2030. This shows that the EU can and needs to ratchet up its 2030 target to make it consistent with the Paris Agreement. 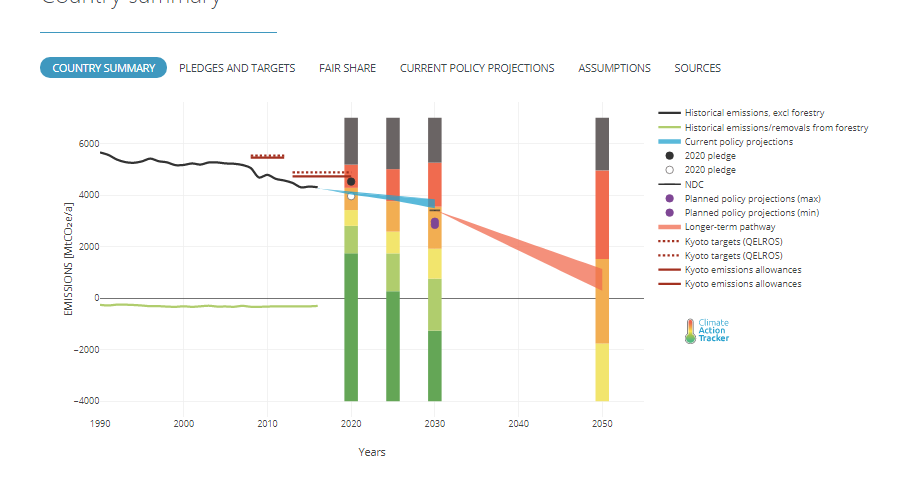